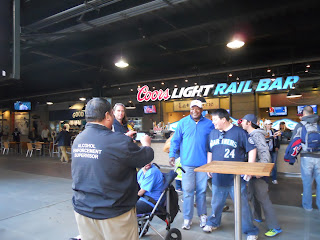 I was able to go to a Seattle Mariners home game back in 2013 and brought cards for Henderson to get signed in case I saw him - I did see him, got my cards signed and took a picture of a guy taking a photo op of Henderson with a fan.

When I heard about Henderson's recent passing, I knew he had a son with a genetic disorder to take care of [actually obscured in the photo op photo] - it's hard to think that his adult son Chase won't have his father to lean on.

As an Angels fan, there is no way not to hear about the home run Henderson hit in the 1986 American League Division Series - that not only derailed the Angels' pennant hopes but perhaps started the fatal downward spiral for the Halo pitcher that gave up the home run.

As is, I really remember Henderson more as a 'junk wax guy' who was more of complimentary player type on the Bash Brothers Oakland A's teams of the late 1980s-early 1990s - he wasn't a star compared to Jose Canseco, Mark McGwire or Rickey Henderson, but I always heard about how 'Hendu' always smiled and had the right attitude out on the field.

It was really sad to hear of Henderson's passing. That at bat against Moore will go down as one of MLB's greatest playoff moments, but as an A's fan... I'll also never forget his presence in Oakland during the late 80's and early 90's. RIP Hendu