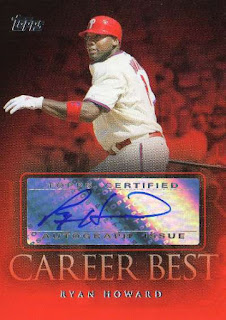 I’ve wanted a Howard auto since I’ve really had only a couple of chances not to end up getting his autograph over the last 10 years - I tend to look at Howard as a slugger who put up some nice power numbers and was a face of a franchise that won the 2008 World Series.

As is, Howard has probably been considered one of the worst MLB players relative to the contract he signed with the Philadelphia Phillies in 2010 - while he still had occasional pop in his bat, his ability to hit otherwise has disappeared [primarily dealing with defensive shifts and his inability to hit lefties].

At first base, Howard seemed to be more of a big oaf with no defensive value - if advanced metrics are to be believed for all the counting numbers he has put up, has only been worth 14.9 WAR [according to Baseball Reference] over the course of his career.