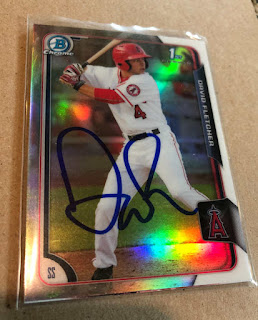 When he was first starting his professional career, maybe I've heard him mentioned on Twitter just a few times and he was just another guy to me - I got him to sign a card when he played in the Arizona Fall League in 2016, so eventually I was able to add it to my all-time Angels autograph collection when he got to the big leagues in 2018.

Fletcher fits that scrappy, grinder, David Eckstein mold that might be a little overplayed or at worst biased - but it's true that Fletcher can be described as many adjectives mostly saved for right guys [guys who play the game the right way]; he's not Manny Machado and he's going to scrap and battle every time he is inserted into a big league game.

In his second year and first full season in the major leagues, the now 25-year old Fletcher has played five different positions as a utility player - but hitting like an Up & Up version of Jose Altuve, Fletcher seems to have nailed down a regular spot in the Angels' lineup.