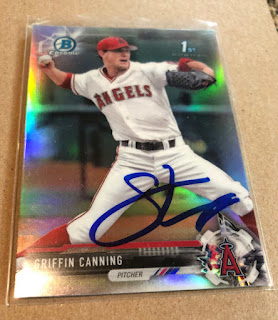 I didn't get a chance to get Canning at all at the beginning of the 2018 season because he made two starts in the California League before he got promoted to Double-A - as it goes, I was able to get the now current Angels rookie pitcher later in the summer as a visiting Salt Lake Bees player in Las Vegas.

One of the collecting things I'd like to focus on at the moment is gathering the loose autographs I have of players who are playing or have played for the Angels - I've counted up around 290 autographs for my all-time autograph collection so far and the goal is perhaps not completion, but to get a good representation of players in franchise history.