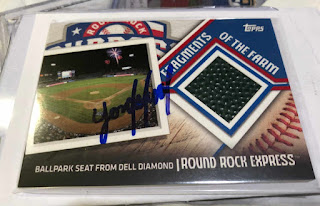 He might not have had many cards back when he played in the Arizona Fall League in 2017, so I had Alvarez sign a 2015 Topps Pro Debut Fragment of the Farm Round Rock Express seat relic I'd bought at a card shop - I thought I'd turned a non-player relic into something unique even if I had to wait a couple of years before Alvarez would presumably be playing his home games at the stadium where the relic was from.

As it goes, I didn’t actually look to see which big league team Round Rock was affiliated with at the time and what level [Round Rock had been the Texas Rangers’ Triple-A farm team since 2011, when I thought it was Houston's Double-A affiliate] - it's just not a big deal, but now I had this 'weird, phantom' in-person autograph card signed by a player whose relation with the subject featured on-card was non-existent.

Alvarez reached the Triple-A level in 2018 with the Fresno Grizzlies [when the Grizzlies were affiliated with the Astros] - but was in playing in Double-A when the Fresno made its only trip to Round Rock, so I couldn't say he at least played at the ballpark as a visiting player.

Go figure, after the completion of the 2018 season, the Astros ditched Fresno and had a new agreement with Round Rock to be their Triple-A affiliate - I could finally show off this card, signed by a Cuban slugger tearing up the Pacific Coast League so far as opposed to stashing it away in a box of fails.