Maybe I shouldn't mess with the bargain bins

At my local card show for the past 3 or 4 weekends, the temptation to stop at the table with the $0.50 bins of cards is too much - the cost of being in the 'here and now' as far as collecting or speculating on cards is something I feel is a bit out of whack.

A part of me wants to be in my own little world as a bargain bin hunter, because I want to go through cards I can flag as keepers - I'm not smarter than the guys in the same room might be scheming to selling or trading for cards worth hundreds or thousands of dollar at minimum, but I'm content to make something of my finds.

In the back of my head, I'm trying to salvage 'good cards' for cheap, even if reality dictates the cards I'm trying to set aside - are irrelevant to the 'show me the money' mentality.

I do wonder if I'm going a little overboard with my digs, where I want it all as a hoarder rather than a collector - maybe there has to be a bigger ambition to look for ideally better cards, even if better cards cost money and I'm not going to pay any sort of 'premium' to land cards that maybe cost as much as I'd spend on 40-80 [$0.50] cards.

A couple of weeks ago it was almost a relief not to see the seller setup at the show, where I didn't see the table with the siren song of loose cards - the seller was back this past weekend however and I was planted at this bins once again.

Maybe I was aiming to take only so many cards since things do add up, but go figure - the seller said the cards I was going through were all a quarter each, so that may not be a nickel or dime per card, but any sort of resistance to avoid rummaging through has been rendered hopeless.

This was my haul of cards from several weeks ago, when the seller still had them for $0.50 each - I don't know if the seller even bothers to refresh the cards, but I'm still pulling stuff out, so it's just a crapshoot. 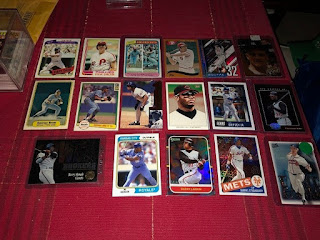 Binder material for my decade stars collection from the 1950s through the 1980s - there might a new focus towards the vintage / old-school guys, though the cards I'll end up with will be either retro cards and/or cards that just aren't as old. 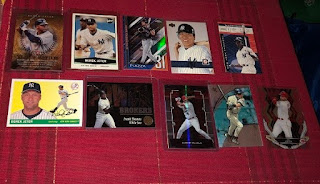 Binder material for my decade stars collection from the 1990s through the 2000s - Hideki Matsui [2003 Upper Deck rookie card] and Alfonso Soriano [fold out 'ticket' insert] ends up being the pair of 'iffy' guys in this grouping, but they are still decade stars for me. 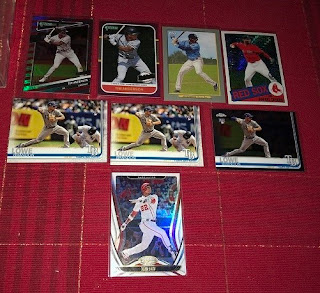 Binder material for my decade stars collection from the 2010s through the 2020s - besides Rafael Devers and Juan Soto, maybe there is a 'wait and see' approach to see if these guys have some lasting power.

I want to believe Brandon Lowe will end up being the next Chase Utley of the decade - a second baseman who might be a little underrated but who has good pop and might string together a solid peak as a hitter. 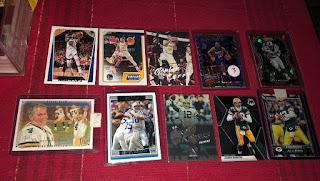 Other sports - can I really go wrong with any cards of these guys? Stephen Curry? Aaron Rodgers? Peyton Manning? Brett Favre? Charles Barkley? I threw in a Ricky Williams in the mix because the shine was too much to ignore. 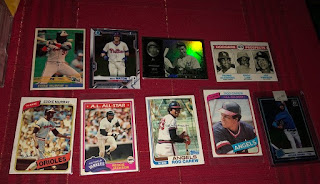 Randomness - cards of Eddie Murray and Reggie Jackson I can use for my Topps year-to-year run, a project I've neglected seriously hunting down cards for, a couple of Rod Carew cards I can use for my Angels Opening Day starters projects, a random retro Joe DiMaggio insert and a Pedro Guerrero rookie card for my team boxes 'dump,' a shiny Taylor Hearn Texas [Rangers] parallel from 2019, a 1984 Donruss Murray and Nick Maton [Philadelphia Phillies] prospect card. 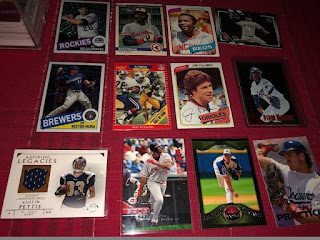 Steph Curry base cards for 50¢? Bay Area collectors would be going nuts over those. Personally... I love all of the early to mid 80's baseball you found... and that Pedro Guerrero rookie card.

There's nothing wrong with being interested in lots of different cards, even if said cards don't jibe with the investor crowd. It just means more for you!