The process behind my bargain bin digs - the last cuts 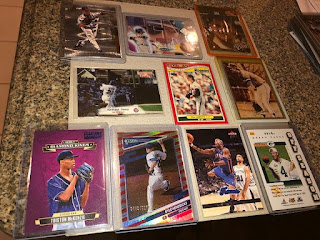 When it's 'last call' as far as my mind is concered, I'm trying rein in a good number of cards to take home [from a $0.50 bin] - where I've made up my mind as to how much I'll have to pay [where at times, it's going to be a strict card per card tally from a seller's POV].

These might be the 10 'other cards' that I might have just put back [where I wasn't going to spend $5 more on 10 more lousy cards] - but go figure ended up in my stash anyway. 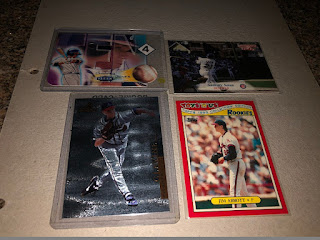 The die-cut Chipper Jones insert, the shiny Tom Glavine parallel and the boxed set Jim Abbott are likely binder material - the Sammy Sosa goes into my batting [horizontal] collection, where I try to round up cards of unique images of batters at the plate.

I don't know if the Chipper insert does anything for me, since it's a little loud, but doesn't 'pop' like a refractor - but Jones ends up being one of my guys on the down low.

The Glavine was just too shiny to ignore - even though I probably underrate his HOF career as far as sentiment goes.

Abbott remains a larger than life figure because of what the one-time big league pitcher was able to do without a right hand - but maybe I'm lukewarm on picking up a run of his cards up because through the junk wax era, he had his share of cards.

Maybe the period of time where cards were getting a little fancy, Abbott had moved on from the Angels for a bit - maybe his second stint with the team through the mid 1990s, was really the beginning of the end. 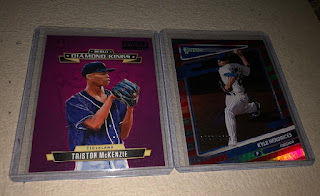 McKenzie might end up being a decade stars / binder guy so I ended up grabbing the 2021 Panini Diamond Kings insert - he had flashes of success in his rookie year in 2020 but maybe the results are a little uneven this past season, especially with his walk totals.

I don't know how to classify Kyle Hendricks where at the moment he doesn't get into my binders as a decade stars guy - even though he's been consistently great, he doesn't have flashy stuff and just isn't that in your face kind of big leaguer. 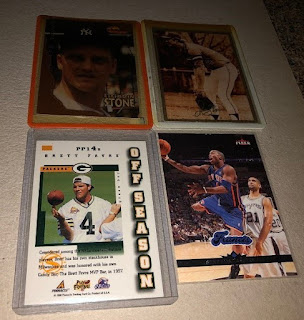 There was probably a 4-5 year stretch from the mid 1990s onward where Brett Favre was the biggest thing in the NFL - the back of the card I picked up has him having a little bit of 'photo op' fun where there is someone taking his picture while he's playfully spinning a football like a basketball. 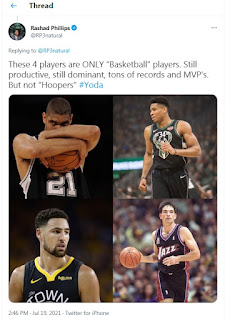 I like the Steve Francis card because it shows him 'hoopin over a bewildered Tim Duncan - which reminds me of this tweet. 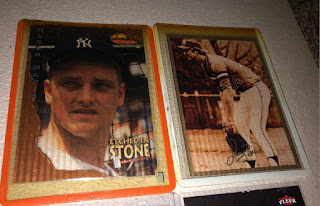 These are a pair of Ted Williams inserts from the mid 1990s - I grabbed them because it looks like they have a lenticular, 3D surface that make them a little more unique.
Posted by Laurens at 11:00 AM
Labels: card show trip, mini-collections, MLB, NBA, NFL, old school, random

The Ted Williams inserts are kind of weird, I have the Bird, and like you said they have a lenticular effect, but it isn't lenticular; so I've really never known what to call them?