Making the most of my low end finds

Even though I've only started going back to attending shows through this year - I don't know if there are 'go to' regular sellers I've sort of latched onto.

I always expect different sellers to get my fix in the meantime and at times it isn't as clear - where I'm going end up getting my game face on to start rummaging through the most random cards.

It may always be a case of stumbling onto a table and maybe going through a few cards to see if it's my type of material - during my latest card show trip, maybe I was a little desperate to find that first table to start off with.

I did find myself at one such table to pull some dollar cards [or 6 for $5] - that I maybe interested in and then started to go through the assorted quarter boxes.

I think the same seller had a setup 14-15 years ago at the more prominent collectible show in the area - he had that mix of assorted quarter boxes that made his spot a regular stop, even though his booth was sort of tucked away at the back of show warehouse.

It’s been a long time, but this person still looks the same - he doesn't seem like he has aged or maybe he was still fairly younger back then.

With visions of finding multiple dollar and under boxes off other tables, I'm afraid that I maybe spending too much time at this one place - but this could literally be the table with the most variety of loose baseball cards [in addition to a mix of other spots], so I had to make it count here before moving on. 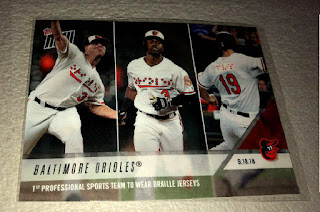 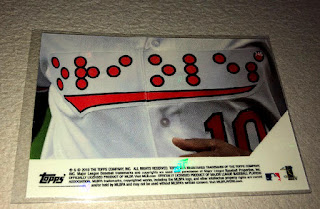 This Topps Now Find was probably my most random find and the most unique card I've found for a quarter - I didn't even realize there was a card for the first professional team to wear braille jerseys to honor the blind. 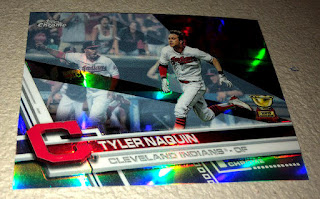 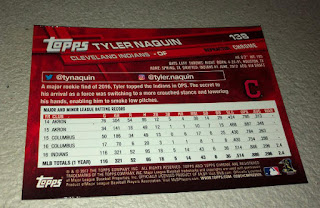 I have seen the Naquin card in various forms and while I never know if it's a baserunning card, hats-off card or something else entirely in my collecting topics subset collection - it's a nice image that pops a bit more done refractor style. 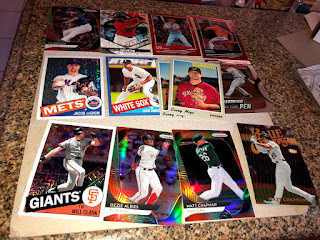 I try to grab assorted cards to fill out in my decade stars collections - if a player makes it to my decade / binder stars collection, that may mean I collect them [as I find their cards], though there certain players will end up being more 'my guys' as opposed to other notable players.

There are 2020 Panini Prizm cards of Yu Darvish, Ozzie Albies and Matt Chapman I probably spent an hour on an idle afternoon looking up - it made my head hurt trying to figure out what parallels these card were...apparently they are Cosmic Haze parallels, inserted in MJ Holdings mega boxes... 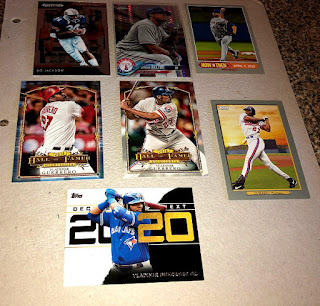 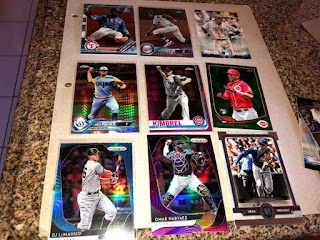 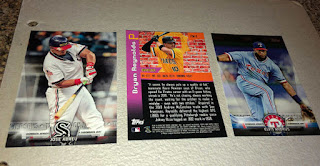 These were thrown into my pile as various finds for the collecting topics subsets I try to keep up with - no matter how prominent or obscure the subjects are. 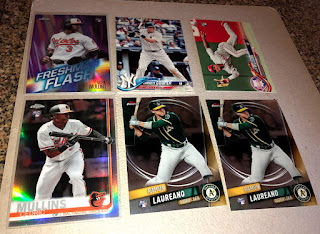 Some rookie stuff - when dealing with the quarter boxes, I take what I can find; I grabbed a 2018 Topps Nick Williams just because I thought it could be a mini-collection add, but I already had the card. 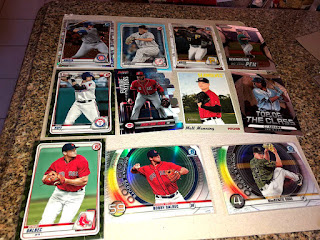 Some prospects from the past couple of years - with the cost of prospect products [Bowman, Bowman Chrome, Bowman Draft] at a premium, maybe I don't get much exposure to loose cards of young players, despite the idea I don't like them just the same, if they aren't first-year cards.

Some cards might be keepers just because I want to be able to keep up - where I'm not completely clueless about more than a few of these players. 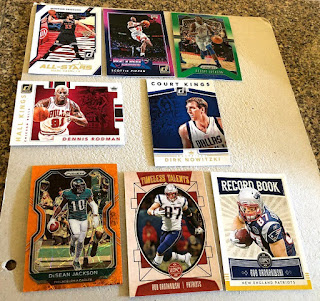 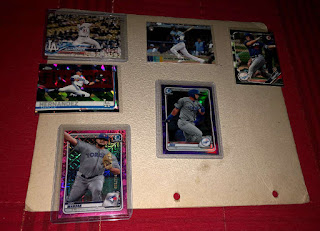 The braille card is sweet... especially for a quarter. I'd pick up every Topps Now card I could find for that price. That Mullins refractor rc is cool too. He's having a great season.

A Topps Now card for a quarter? That's pretty incredible! I had no idea about the Braille jerseys either - pretty cool.