I was worried the seller with the $0.50 bins wasn’t there like it was a couple of Saturdays ago - I like digging through and pulling out the most random cards, but prepared myself, if that wasn't going to be the case this time around.

When I got to the show, I started to go through a random seller’s dollar boxes - this was the box I kind of looked with some 2020 Topps Advanced Stats parallels that caught my attention.

The last time, I thought these belonged to the seller with the $0.50 boxes because it was left out loose - where it may have actually been forgotten after the other seller packed up for the day.

I was able to dig out the parallels and while they might not generate too much interest - they are maybe low key binder or A-Z insert material. 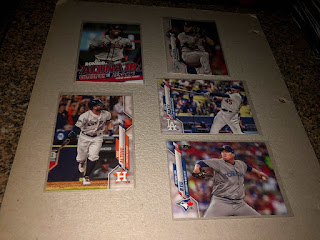 I found ones of Hyun-Jin Ryu, Jose Altuve, Dallas Keuchel and Matt Beaty - maybe Ryu was the headliner for me, but I didn't find 'better' players.

I made it a point to grab the others to have a small loose quartet of similar parallels together - the Beatty variation missed being a rookie card issue by one year and I might have hesitated on grabbing the card.

In my head, it just would have been better if it was an rookie year parallel - even if talking more about a rank-and-file big leaguer who is the least accomplished of the four. 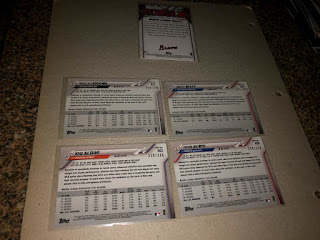 Even if they maybe less of a chase out in the wild, where it’s a little tricky to look the cards up - the parallels are a little easier to identify outright because they are serial #’d.

The dollar box cards were seemingly odds and ends from the past couple of years, rather than a deep mix from past the 5-10 years - I grabbed a 2020 Topps Update Target Exclusive Ronald Acuña Jr. Highlights #TRA-13 card just because he's in the middle of blowing a bubble during a home run trot.

The person at the table was kind of amazed I was sort of on mission at his table - I get self conscious, but even if I’m wasting time, I like to do some digging for cards.

“You have a lot of patience to go through those cards,” he said. “I only care [to keep track] of the cards in the showcases.”

I hope the guy wasn’t telling me to bug off and while he was just sharing some real talk - maybe it reinforces the idea I maybe the only one who cares about this stuff and I’m just a little out of touch.

I wanted make up a little mix of cards and at least spend something to get my feet wet - money is money and I wanted to show I didn’t waste my time re-sorting the guy’s boxes just for the heck of it. 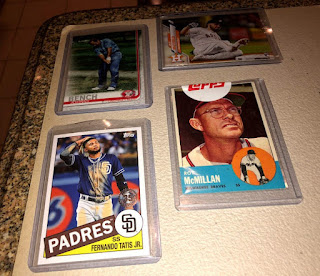 Out of the $2 / $5 boxes I grabbed some other cards - though I had to look closer at the backs to see which price individual cards fell under. 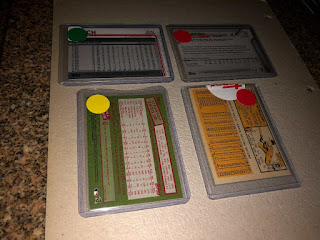 “I haven’t gone through those cards in a [while],” he said. “I just mark off the ones according to color for my son and the money goes to him.”

I grabbed a 2020 Topps Vintage Stock Jack Mayfield #485 for $2 - he’s bounced around as a utility guy, but is currently employed by the Angels; a rookie year parallel of the one-time Houston Astro and likely an obscure Angel who is going to come and go.

I grabbed a 1963 Topps Roy McMillan #156 beater for $2 just because it was too odd out of a box of cards from the past couple of years - it has a Topps sticker over the toploader, but don’t know if it came that way.

Finally I grabbed a 2019 Topps Update Johnny Bench #US182 for $5 as an impulse purchase - even though it’s not a keeper, notably for what I paid, it may have had the most interesting image of the catching legend at the golf course.