The process behind my bargain bin digs - mini-collection material

Maybe I intend this post to be a little all over the place, but to have something to go with my other post - here are images that showcase my focus towards the mini-collections. 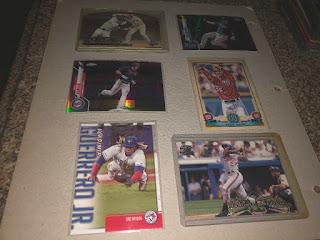 I have mini-collections for baserunning, home run trots, base hit gestures, fielding plays [separated by positions] and a horizontal batting shot - it doesn't seem that long ago that Vladimir Guerrero was an active player through the late 2000s and now his son is enjoying a breakout season on his own as a big league star. 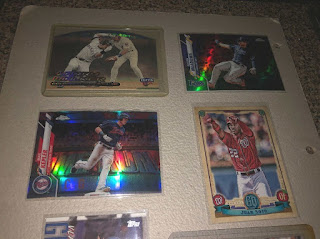 The shiny cards are a pain to take pictures of because of the excess glare - but the way they 'pop' is quite the nice sight to see. 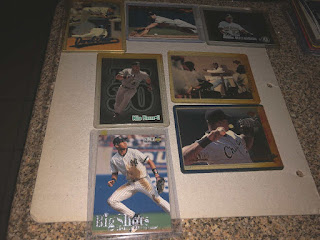 There is a couple of Derek Jeters, a Cal Ripken Jr., Tony Gwynn, Frank Thomas, Mike Piazza and Rickey Henderson to add star power to my mini-collections - I like the 1997 Upper Deck Collector's Choice Big Shots insert because there is a lot of dirt on the uniform, while the 1996 Upper Deck V.J. Lovero [R.I.P.] inserts are classy. 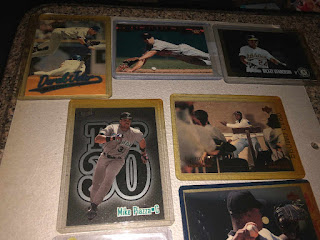 Maybe the Piazza is a fun card / oddities add because while he had 'unfamiliar' stints with the San Diego Padres and Oakland Athletics at the end of his MLB career - in his prime, it was strange to see him traded from the Los Angeles Dodgers to end up on the Florida Marlins, for a stint lasting 5 games. 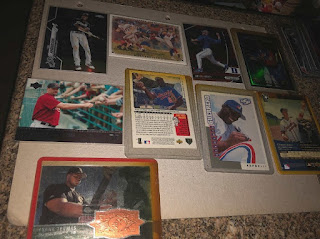 There is a Tim Anderson refractor which is nice with him fired up, a random Upper Deck Masterpieces Eli Manning / David Tyree card and a Bryce Jarvis card - Jarvis was a first round pick in 2020 and a son of a former big leaguer [Kevin], so that's a bloodlines collection add.

The rest of the cards [a Pedro Martinez might be obscured on the top right corner] - feature stars signing autographs and doing a little fan service for the fans.

This top row of this assortment features 'pitchers hitting' cards with Greg Maddux on the bases and ready to take his hacks alongside the batting cage - it maybe the last card I would ever think about picking up, but a 2019 Topps Chrome Kolby Allard '84 Topps #84TC22 ends up a keeper.

The second row features a 2013 Topps Chrome David Ortiz #79, one that has him in a Boston Red Sox 'retro uniform,' a 1994 Topps Stadium Club Rickey Henderson #654 that goes into my 'shades' collection and a pair of cards of NBA legends Patrick Ewing and Ray Allen - which coincidentally features a pair of other NBA legends [Roger Murdock and Kobe Bryant] making 'star on star' cameos. 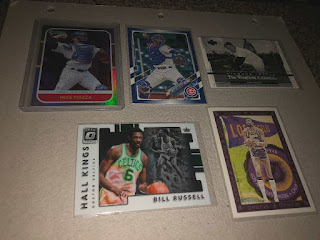 I'm not quite the authority on collecting catcher cards but I like to round up the 'tools of ignorance' guys just the same - I picked up the cards of [Piazza, Willson Contreras and Yogi Berra] as probable binder material, but figured why not make them mini-collection adds to add to my yearly totals.

Finally I picked up a couple cards featuring Bill Russell and Wilt Chamberlain because they are iconic NBA figures who have a lifetime's worth of narratives behind their playing careers - maybe I wanted to step out of my comfort zone for a moment and pick these up, even if there was only a dollar spent between the two pieces of cardboard.

The Lovero insert set is awesome! I've thought about building that set on multiple occasions. I didn't realize he had passed away.

The Topps Murad set was, and still is, really neat. The retired greats looked especially good with it's design.