My experiences with some junk boxes of doom - box 4.2 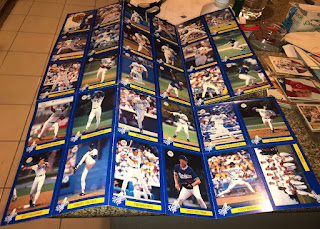 I think these are complete L.A.P.D. / DARE Los Angeles Dodgers sets from 1995 and 1996 - maybe at least a couple of cards from the perforated sheets have been damaged due to the natural conditions, but most cards are fairly clean and if I wanted to separate them, I don't need scissors to do so. 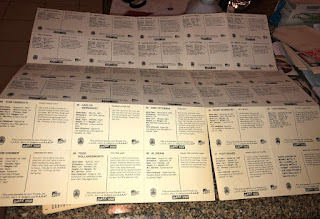 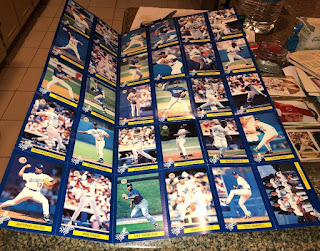 These oddballs are not worth anything but maybe after a certain number of years [25 years] - cards like this end up starting to be old-school curiosities, where it stirs up some sort of faux collecting nostalgia for cards I've never hand in-hand before. 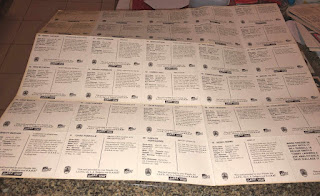 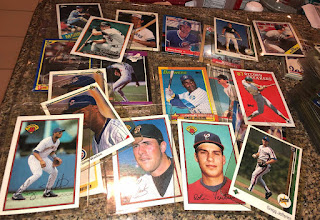 More junk wax era singles in semi-rigids holders - I want say these cards wouldn't look out of place in card magazines from the era, even though the players pictured on the cards never had that lasting power in the hobby. 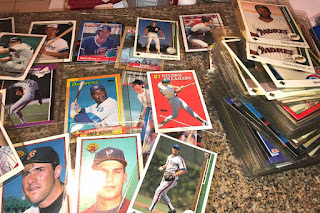 Maybe I'll set a number of these cards aside in a collecting time capsule of sorts - where I'm reminded that many of these cards were coveted as 'here and now' material from the years I really started collecting. 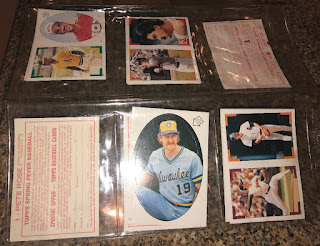 Finally there are these Topps stickers from 1986 - they are odd sized, flimsy and not something I'm familiar with at all.

I'll try and sort them out just to see if there is any more star power - but this might be it with Robin Yount, half and half combo of Goose Gossage / Jack Morris, half of Pete Rose, Wade Boggs and Jim Rice. 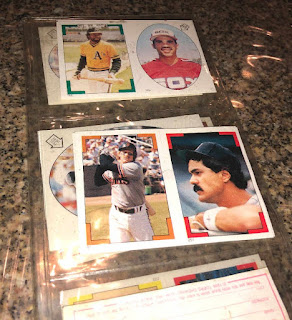 I don't know if I'll bother looking up who's who on these random stickers - like one showing a pair of longtime, shortstops who won Rookie of the Year awards [Alfredo Griffin and Ozzie Guillen] or another picturing Dan Gladden and Dwight Evans.
Posted by Laurens at 11:00 AM
Labels: 1995 L.A.P.D. DARE, 1996 L.A.P.D. DARE, card show trip, hot rookies, junk, junk wax era, Los Angeles Dodgers, oddballs, old-school, panels, random, stickers

'86 Topps Stickers were the first baseball-related thing I collected. That's a nice box for $3.

I take it you weren't a sticker kid?

I think the first baseball stickers I became sort of familiar with was Panini.