Better than a blaster [?] - random finds

I was charged $15 for this grouping of assorted cardboard at a card show - maybe I'm not exactly sure what I'm looking at here, maybe just odds and ends to be funneled away or to be left sitting loose in my collection somewhere. 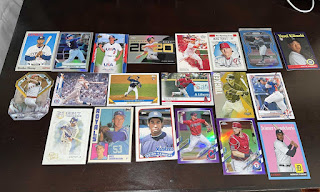 Maybe the $0.50 boxes were a mix bag of assorted cards but there might be some cheap thrills - I wasn't as emotionally invested in the rummage because it was off an unfamilar trio [?] of sellers who were doing business at the other end of the tables where I was doing my digging at.

At times I like it where I'm left alone to do my thing - but it feels kind of weird where I feel a little isolated and just to check out, I have to make an effort to flag one of the people while they might be preoccupied with other important things.

Dollar box finds except for the Wander Franco - I figure I'd splurge and pay $3 for a 2019 Topps Minor League Heritage Franco, though I see it as falling in that prospect, pre-rookie, non-MLB netherworld where it's not going to be particularly valued.

Maybe in 5-10 years, if Franco ever lives up to the hype bestowed upon him, maybe my lousy card trickles up to a $10 card - though Franco wasn't setting the league in fire and got hurt, he figures to be an all-star talent through his prime. 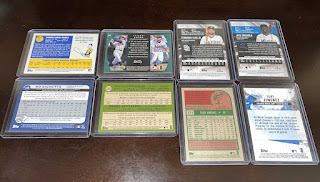