For period of at least a couple of months and/or at least four show dates, I haven't been able to count on getting my dollar bins of doom fix from pair who run them - either the duo was out of country, doing other deals at other shows in other states or just biding their time with their other collectible hobbies.

As it goes, I was able to see the duo again at two different shows and while still just about strangers [after a year of 'hanging out' at their tables for hours at a time] - it's a card show routine to seek out the table and start digging to see if I can build a stack of dollar material.

As it goes however, I'm not sure if the quality was there nor the quantity off the most recent dollar cards sitting in monster boxes - I guess it's all cyclical, where presumably the boxes are subject to turnover and/or constant rummaging by collectors who are sort of the 'OG' regulars chatting up the seller duo, sitting with the sellers at their tables, et al.

I'm trying to show what I bought off the dollar boxes of doom [for the most part] from two different show dates and see [if inclined] which may have been the better lot of cards - these last couple of times, maybe there was a certain disinterest digging around where the material was more of the 'same old, same old' and it might have been harder to fish out keepers. 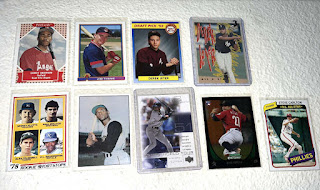 Some baseball, including a minor league insert of Derek Jeter [$3] I pulled off a miscellaneous priced box - the off-brand draft pick card of Jeter is cheesy at best but I don't think I've ever had the card in my collection and likely one to squirrel away among my other Jeter binder cards.

The last card I may have added to my pile was a 1978 Topps Mickey Klutts / U.L. Washington rookie card - where it was a little off-grade for me and there might have been smudging over the name plate that might be more common with this particular card.

On the other hand, the card was a lousy dollar and maybe I can use it as a binder material centerpiece rather than something I'd expect to showcase as a single outright - maybe I just didn't want to see it in another collector's stack at the table, as he was killing time, trying to shuffle through the rows of assorted cards he might flag as probable keepers.

The Garret Anderson minor league card was probably something I left behind from the last time I was at the table at a different show - I assume it's only a pack pulled issue, but it's still an early pro card of a franchise Hall of Famer [who is now 50 years old as opposed to his mid 20s through mid 30s when I started followed him as a player years ago]. 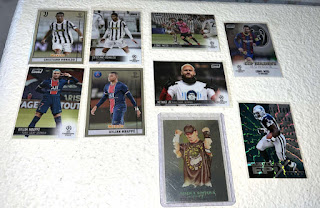 Maybe I just wasn't as emotional interested, but these finds represent what I could find where maybe I had to resort of making cards from other sports keepers - I'm a straight and narrow baseball collector, but I picked up a John Cena card for the pop culture factor, an Emmitt Smith card because it was shiny and he was one of the running back GOATS of all time.

I know nothing about soccer, but here I am picking up random cards of these guys i.e. Ronaldo, Messi, Neymar, Mbappe - who might be the GOATS of their sport or shaping along that way, where maybe I had to have at least one card of the players featured, even if the cards are only worth what I paid.

I've tried to make it where I do not go too crazy over the cards, but may pick up between 40-80 cards at one time - at least at this go around, it wasn't as much fun rounding up what I ended up with.

I hate when a seller I'm expecting to see is absent at a show - really breaks the routine & general flow of the day for me. But I'm glad the "Dollar Boxes of Doom" were back & it looks like you found some good stuff. That Ichiro is neat.

I don't usually seek out a lot of modern minor league cards, but I would've picked up that Garret Anderson too.