I usually go to the twice in a month shows to see the seller with the dollar bins of doom, but it was posted that the seller [or at least his partner] would be at one of the weekend shows with about a thousand fresh dollar cards - maybe I need to wean myself off where the dollar boxes of doom isn’t quite the destination that makes or breaks a card show trip, but I go on the idea I never know what I may find.

There might be some FOMO involved, though it's not like I'm ever in a situation where like minded collectors come together, anywhere to pore over and compare their cheap-o hauls - I usually depend on the other card blogs to see if what I may have gotten lines up with what others have picked up, even if those other collectors get the cards I do for quarter or dime as opposed to a buck a piece.

When I'm in the trenches at the card show, it seems like the dollar boxes of doom demographic are more of the older heads, who might they are really doing a thing picking at the 'bargain box' material - it's harder to see a younger, 'in their prime' collecting demographic, who are laser focused into valuing 'here and now' material. 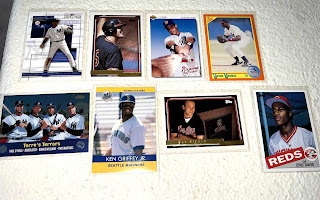 If nothing else, I'm looking for binder material that may add a little pop to my pages - maybe a little historicity or some oddball fun.

However, I can imagine being a collector in the late 1980s making Davis rookies a big deal - so this was a scratch the itch card on the downlow where I finally have a card people stopped caring about 30 years ago.

Davis seemed like he was always hurt when he should have been putting up numbers to add bulk to his career totals - through the mid 1990s, he had a career resurgence as a useful, productive player and due to colon cancer, Davis became a big league human interest story.

1991 Playball U.S.A. Ken Griffey Jr. #91-1 - with an MLB logo on back, I think this is a fully licensed oddball and I find these types of cards more appealing [than just the issues licensed by just the MLBPA or licensed by a player pictured] without the MLB logos scrubbed out.

1992 Topps Gold Cal Ripken Jr. #40 - I think the 1992 Topps Ripken is one of the low-key classic junk wax era cards, so picking up a parallel was something I had to do.

2000 Topps Chrome Combos Torre’s Terrors #TC3 - feat. Paul O’Neill, Derek Jeter, Bernie Williams and Tino Martinez; I got this because of Jeter, but it’s not quite the 'Core Four' quartet, so I’m making it an O’Neill card.

1990s
1990 Score Rookie and Traded Frank Thomas #86T - this junk wax era late season card never really registered in my memory banks, especially when he had a draft pick RC in Score’s flagship the same year, but it’s a rookie year card that I didn’t have.

1992 Topps Gold Jim Thome #768 - if Topps or Upper Deck held off printing cards of Thome in 1991, maybe this wouldn’t be a second year card and the parallel would be more of a big deal.

1992 Upper Deck Minors Chipper Jones #165 - worth only what I paid, but a nice looking minor league era card, where I want it to mean something more than what it is. 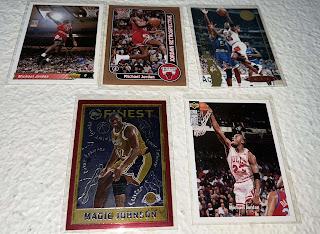 Other sports
1994-95 Upper Deck 1992 reprint He's Back Michael Jordan #23 - I wonder what sorcery was this to nave a 'He's Back' notation on an older Upper Deck Jordan card and didn't realize it was a reprint.

1995-96 Topps Finest Magic Johnson #252 - peeled; just about all the Magic cards I'm familiar with are from the early 1990s junk era of basketball cards, so printed in the UV era, it's a little different. 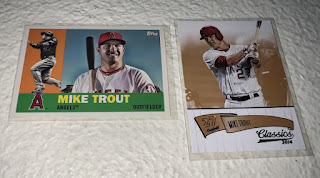 Angels material - Mike Trout
2017 Topps Archives Mike Trout #1 - I found the base card and the variation and while I could have taken them both, maybe I was a little stingy and without digging out my phone, hoped I set aside the correct card. 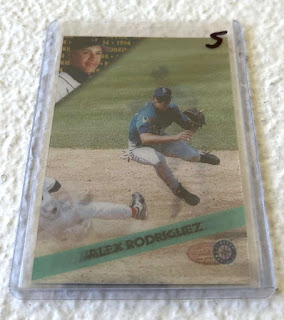 I guess $20 was good number to spend as I found 15 ‘lousy’ dollar cards and a 1994 Sportflics 2000 Rookie/Traded Alex Rodriguez RC #148 for $5 - from one of the lower end boxes of miscellaneous cards set out on the table.

I hardly pay attention to A-Rod's numerous post career endeavors, where he is striving to be relevant, looking for a back door to the Hall of Fame - but his early MLB cards are a trip back in time, where the sky was the limit for this new hotshot for the Seattle Mariners, where he might even supplant teammate Ken Griffey Jr. as the most popular player in the game.

Love Eric Davis and back in the day thought he was a sure fire hall of famer. Just a big what if but he was fun to watch and still enjoy his cards. Good post and cards.

I liked Eric Davis quite a bit when I was a kid, if I had been smarter I would've collected him.