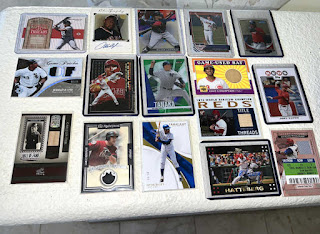 I found myself digging through $2 boxes where I plugged along going through most of the baseball portion concentrated in one monster box - alongside another guy busy going through a single row of $2 cards in a separate monster box.
I'd pulled out some probable keepers to build on from what I assumed was the main $2 boxes - after the other guy basically finished up, plucking about six cards and making his purchase, I figure I'd pounce on what he was looking through.
I thought I had the box to myself, however an older guy started going to the row and I thought he was just some casual - I wanted to stay out of his way, where I'd let him have first look through the cards where he started digging through, and then maybe I'd take my turn to go through the stacks of cards he was finished with.
Maybe he gets bored soon enough and moves on, but he was already asking the seller how much would it take to buy the entire row - he started to pore over the cards, maybe seeing what he really wanted and/or counting them out.
He asked if I was done and I kind of gestured 'yes' even though I would have liked the opportunity to go through the rest of the cards without being out scooped - knowing he wanted the row of cards for himself and just about to buy just all of it, was I the one who starts lacking manners if I insist on going through the rest of the cards?
Whatever I had in-hand before this other guy tried to make an offer was fair game - but I wouldn't want someone else trying to cherry pick cards off a row I'm trying to buy as one lot.
I still had loose cards I'd flagged from this last row but put back a couple that I wasn't really considering - with the cards I'd set aside in my original rummage, I think I ended up with 16 cards and was basically charged half off, which was good enough.
Posted by Laurens at 5:59 PM
Labels: card show etiquette, card show trip, certified autographs, memorabilia cards, odds and ends, parallels, random, Rookies

Uggh, been there my last 2 shows. Going through my lists and hadn't gotten to certain stacks yet, but knew I was going to get there. Someone walks up and gets to the cards I hadn't yet. Dealer looked at me knowing I needed some of them, but I let it go. In a sense, fair game as I hadn't claimed them yet. And they were harder to find vintage. Heck, one guy offered to flip it right there, but at a nice mark up. Yeah, about that...

I would have been annoyed by the other guy. I usually won't touch a box that someone is currently digging through, but if I do... I make sure he/she has already been through that row AND I ask if they're done.

I don't go to card shows, but that would have definitely bothered me a bit.

I've had people come up and offer to buy the entire box that I was looking through many times over the years. The buyer and the dealer usually both say that I can continue looking through it before their transaction goes through, but once I know it's been bought, I always lose complete interest in looking through the rest of it.