The Angels could use this guy - Colby Rasmus 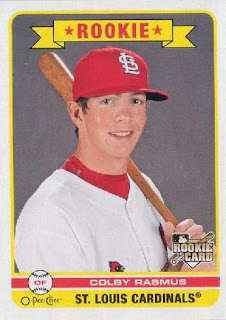 The Angels need to trade for St. Louis Cardinals centerfielder Colby Rasmus - before some team like the Boston Red Sox or New York Yankees pick him up on the cheap and watch him cash in on his immense talent.

Rasmus has apparently had problems with manager Tony LaRussa not just this season and while the animal rights advocate is getting long in the tooth [and may not manage the Cardinals past this season] - Rasmus isn't doing himself any favors after being called out by teh Albert Pujols himself.

Despite Rasmus' ability to play a premium defensive position while being able to hit a little bit, hit for power, run and maybe pick up 40-50 walks in a season - at the ripe old age of 24, he is just another guy on the Cardinals' roster right now.