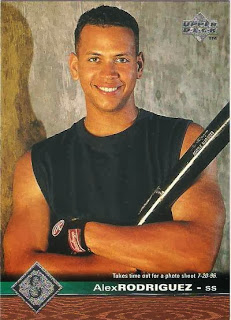 One of my favorite base cards of A-Roid early in his MLB career was his 1997 Upper Deck - part of me still likes the idea that this guy put up the numbers and was the best baseball player in the planet at one point, but then the other stuff is just too much.

Maybe a part of me wished he was A-Rod at some time in his life, but he's exposed himself as a sham and a bum - it's hard to consider anything positive without thinking about the supposedly unsavory things he's been involved with like performance enhancing drugs.

The sad thing is I'm probably looking forward to see if he has any juice left - see if he can prolong his career and past all the drama, can step up to the plate in an actual MLB game in 2015.