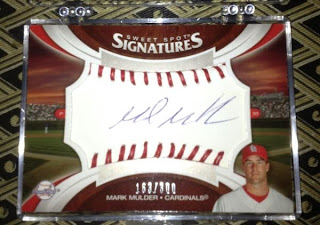 As far as pro sports are concerned, it's a noble thing for a Major League team to go see if Mulder has anything left - but if his comeback falls short, the Angels have lost an opportunity to give someone else a little younger and more able to make their pitching staff this upcoming season.

I remember picking this 2006 Upper Deck Sweet Spot card years ago and wondering why exactly - while never dominant, Mulder was really quite good as part of the Big 3 in Oakland and in his final full season with the St. Louis Cardinals in 2005, won 16 games and pitched over 200 innings.

After being out of the game for so long, maybe the more realistic goal is for Mulder to compete for a job in the Angels TV broadcast booth - he looks the part and has been doing ESPN the past two years, so why not give Mark Gubicza something to think about.