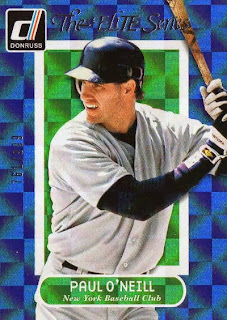 I like baseball cards in general and I happen to live in a loop where I have to seek out new baseball card products - I picked up four packs [$3.50 each from the card shop] to see what they would look like.

Even though these cards aren't licensed by Major League Baseball - these cards probably fill the void as a 'midlevel' alternative to 2014 Topps, though interest may lag with 2014 Topps Heritage coming out this upcoming week. 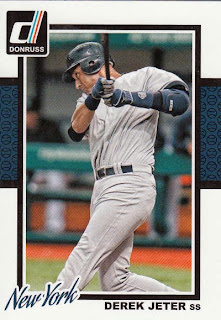 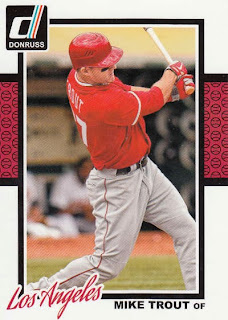 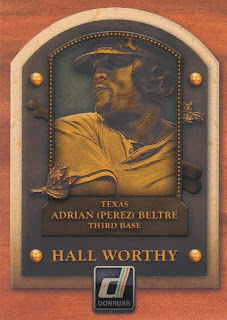 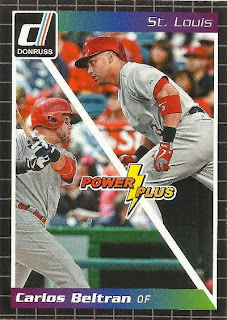 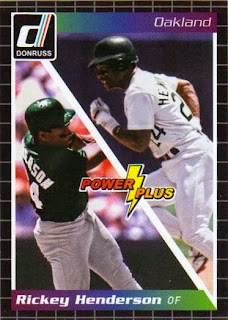 #2 Rickey Henderson - Power Plus insert
#16 Paul O'Neill - The Elite Series insert; serial #'d 761/999; if nothing else, these cards my favorite from this re-imagined Donruss product, since I never had the opportunity to come close to having any of the original Elite Series inserts from the early 1990's in-hand.
#113 Everth Cabrera
#170 Yasiel Puig
#54 Ryan Zimmerman
#63 Adam Dunn

The re-imagined retro look of the cards is passable, while still feeling glossy and modern - though the images seem constricted with too much cropping, they sort of pop with the borders giving the illusion that the images are matted within the cards.

The backs are supposed to mimic the 1988 Donruss set - a non-glossy finish of sorts help the 'retro' feel of the cards backs, though it's not quite the original, dingy card stock use on the junk wax era Donruss cards; not as much stat lines / information are crammed on the back of these 2014 cards compared to their original counterparts.
Posted by Laurens at 4:00 PM
Labels: 2014 Donruss, hobby, pack breaks, recap

I can definitely live without those. Thanks for buying them so I don't have to. ;)

Congratulations on pulling the O'Neill. I have always wanted a 91 or 92 Donruss Elite insert for my collection. People paid big money for those back in the day. Surprisingly... they still command a decent dime.

Hopefully the MLB will open their eyes and give companies like Panini and UD their licenses back so they can produce cards (with logos) that I'd want to collect.