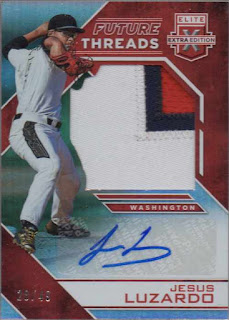 Did I really want to buy a pack of cards that cost as much as a blaster box [?] - the configuration for this year's EEE product is there are only five packs in a box with less base cards to fiddle with, but more hits to sort out, presumably for case breakers who may end up doing group breaks.

I broke down to try at least one pack, though I wasn't impressed with how the cards look - especially with the bright shiny foil board [normally a plus] clashing with images of players in logo less uniforms [at least for the ones not pictured in college or in Team USA uniforms]; the nameplates at the bottom reminds me of the 1961 Golden Press set cards. 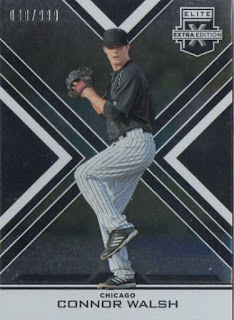 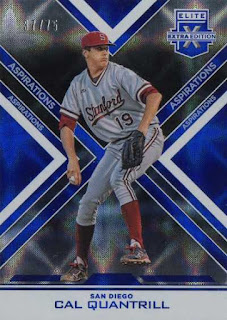 #8 Cal Quantrill - Aspirations parallel serial #’d 37/75; I've always liked the handful of Aspiration singles I've found over the years and it's a change that these are not die-cut anymore.
#FTSA-JL Jesus Luzardo - Future Threads Silhouette Autographs Emerald Red serial #’d 28/49; I like the jumbo patch swatch, but Luzardo is just an 18-year old pitcher and who knows if he’ll get to the big leagues.

I thought Luzardo was just another Dominican or Venezuelan international signee, who may have been in pro ball for a few years already - but he went to high school in Florida and was a third round pick this last June...he is Venezuelan, though he was born in Peru and came to the United States when he was a year old. 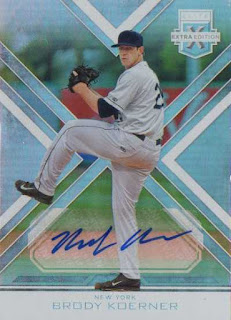 #170 Brody Koerner - another auto; I’ve almost never heard of him except I actually got his autograph in-person, so this is a redundant pull [unless he does something within the next year or two]. 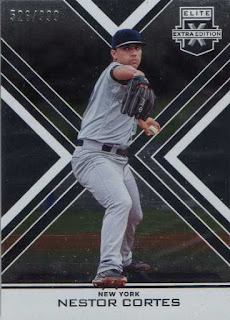