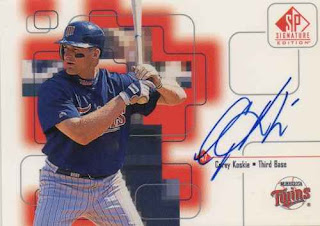 1999 Upper Deck SP Signature Edition Autographs Corey Koskie #CK - I pulled a Koskie autograph from 1999 Upper Deck HoloGrFX back when the product came out and I'm tempted to say it may have been one of my first autograph pulls, when there was still some allure with certified autographs.

I probably got Koskie's autograph at least a few times as a player but this autograph card replaces that previous pack-pulled card - same era, similar 'kind of messy' scribble [though this card was a more common pull out of a one autograph per pack product rather than a card inserted in every couple of boxes or so of a low-end product].

Even if Koskie didn't post year-to-year all-star numbers as a player - he was a lot steadier and productive in his 9-years in the big leagues than I gave him credit for and had overlooked the fact his career was cut short prematurely with a post-concussion syndrome. 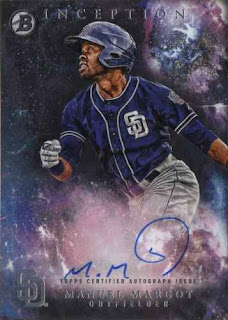 2016 Bowman Inception Prospect Autographs Manuel Margot PA-MM - Margot is one of the best prospects in baseball [currently #26 among MLB's Top 100] and while he may not develop into a true superstar, Margot seems to be an athletic guy with the potential to be a pretty good all-around player [think Andrew McCutchen lite]. 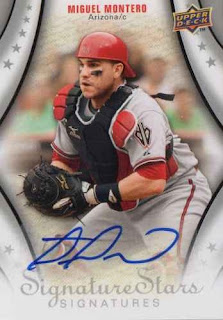 2009 Upper Deck Signature Stars Miguel Montero #158 - he is more of a 'scratch an itch' guy for me, a rank-and-file player whose autograph I haven't gotten otherwise.

Montero lost playing time to David Ross and rookie Willson Contreras during the regular season - but got some redemption in the postseason as a contributor in the Chicago Cubs' run towards their first World Series championship since 1908.

Montero hit a grand slam in Game 1 of the National League Championship Series - and also chipped in with had an RBI single to extend the Cubs lead in the deciding Game 7 of the World Series.

1999 SP Signature autographs are amazing. One of the nicer on-card autographs sets of the era.

I agree with Fuji. Miggie seems to be a good guy and we love just about anyone who contributed to the Cubs historic win. Merry Christmas!