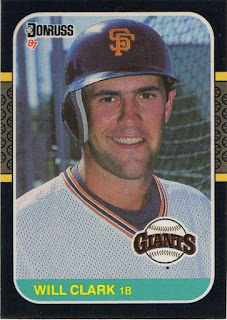 Decades after the fact, prominent rookie cards from the 1980s have been exposed as worthless - featuring more than a few players who just didn't make the leap from superstars to Hall of Famers.

Under inauspicious circumstances, I owned this rookie card for about two weeks, when Clark was among the hot players of his era - things caught up with me soon enough and ever since, the closest I ever got to a Clark rookie was his 1987 Topps.

To square things away, I finally picked up a copy this card - since it represents one of the cards from my early years of collecting, even if that first copy of the card I had in-hand wasn't actually mine.

Great card. I've been finding a bunch of mid to late 80's rookie cards in dime boxes over the past few years. It's crazy to think that you can pick up guys like Larkin, Glavine, The Big Unit, and Clark for so cheap. Then again... that's what happens when they let the printing presses run non-stop during that entire era.