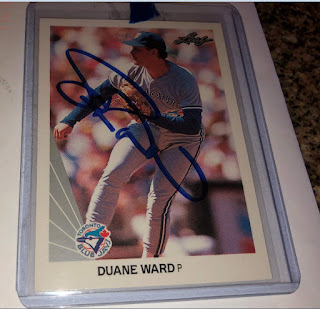 Off a Facebook post, I saw some extra signed cards offered f/s, presumably from a past signing with the former big league reliever - I saw there was a 1990 Leaf pictured and picked it up for $11.

It probably doesn't work for everyone, but rather than deal with the hassle of sending in a smaller item like a trading card to an organized signing - I would rather take my chances seeing if there are leftovers where I can take a look at how an autograph comes out for a card from a particular set [when available].

While I don’t think Ward has been considered a historically tough autograph to get - he seems more likely to do something for pay than for free and I don't know if there was ever a period of time [maybe over the past 15-20 years] where he regularly responded to through the mail requests.

I remember Ward as a hard throwing weapon out the Toronto Blue Jays bullpen through the early 1990s - he pitched a lot of innings in his prime and while his postseason pitching totals were a little shaky, he did his part during the Blue Jays' back-to-back World Series titles in 1992 and 1993.

I mostly forgot about him through the mid 1990s, though he missed all of the 1994 season and his MLB career was basically done the next year - he was inducted to the Canadian Baseball Hall of Fame in 2020.