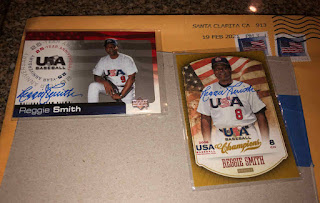 After putting together a paid request with $30 to Smith’s promoter, who has handful of former LA Dodgers players signing for TTM for a fee - I got my pair of cards signed in about a month.

Though he is an old-school / vintage era guy, Smith has a couple of coaching cards in sets [2004 Upper Deck USA 25th Anniversary and 2013 Panini USA Baseball Champions] - I'm still trying to get as many signed to this day.

While I wasn't familiar with Smith's MLB playing career, he was a fantastic player from the mid 1960s through the early 1980s - finishing with over 2,000 hits, slugging 314 home runs with a lifetime OPS+ of 137.