Maybe it's not reasonable to really live by the mail box, waiting on returns, especially when I'm not a 'mass TTM mailer' and most days yields bupkis - still, it is fair to anticipate something, when I have made that tiniest bit of effort to send out autograph requests to get my random card (s) signed. 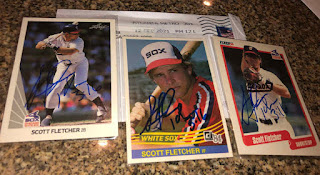 Fletcher, a former big league infielder from the 1980s through the mid 1990s signed my cards in about 3 weeks - with the realistic number of cards to pick up and send out, who knows how long my interest is going to run, but it's another 1984 Donruss and 1990 Leaf pair signed. 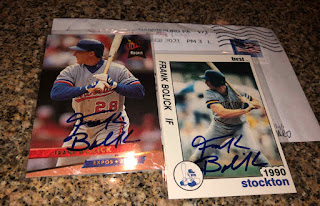 Bolick signed my cards in about a month - in his 16-year professional playing career, Bolick spents parts of 2 seasons with the Montreal Expos and Anaheim Angels.

Though Bolick was a fringe big leaguer, it's fun looking up his numbers - especially when through his mid 30s, he put up some video game numbers during a 4-year stint in Japan 20 years ago.