Off a couple of Facebook posts from the same collector [presumably a Milwaukee Brewers fan, so that's a theme here] - I saw some IP/TTM signed cards offered f/s and decided to take a couple off his hands.

I thought I was good with the pair of purchases [Jacob Barnes and Jim Ganter], but the next time I'm scrolling through my feed - but I saw another f/s post, which was more certified autographs from some 'prominent' Brewers stars of the early 2000s i.e. Ben Sheets, Richie Sexson, etc. 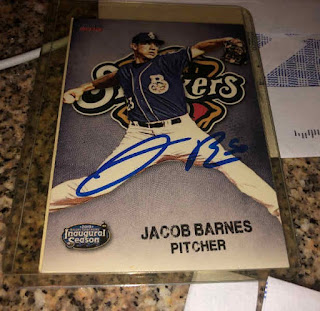 Barnes was an Angel in 2020 so I needed his autograph for my all-time collection - the 5-year big leaguer had a bloated ERA but struck out 24 batters and walked only 4 in a decidedly small sample size of 18 innings through pandemic 2020. 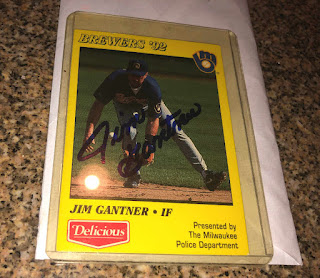 Ganter doesn’t register as a guy whose autograph I had to get, but his playing career went through the junk wax era, so at least I'm familiar with the name - the oddball Milwaukee Brewers police set issue from 1992 caught my eye and while I don't really consider it vintage [despite all the years that have passed], the yellowed top loader certainly is.

A second baseman for most of his career, Gantner spent 17 years with the Milwaukee Brewers - he wasn't the type who put up big offensive numbers like teammates Robin Yount or Paul Molitor, but was solid for the era he played in. 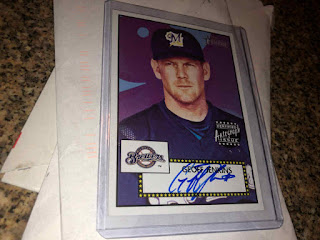 Maybe the scavenger in me is looking to salvage things once in a while, so while I probably didn't a Jenkins autograph in the here and now - it's a 20 year old pack pulled issue from a debut year of a set that has some tradition and history associated with it.

Jenkins was a hard hitting outfielder who had starred for the Brewers for most of his career before ending up with the Philadelphia Phillies for the their World Series championship run in 2008 - I remember where he had a little cult favorite following in Milwaukee because he resembled NFL star Brett Favre.