My first card show in a while

I saw a flier posted on an Instagram account for a card show and since it was otherwise local, thought it might be worth my time to check things out - there is always a fear I might get stuck in some kind of weird swap meet atmosphere where the are only a limited number of tables with mostly vendors who might not actually be selling cards.

There is still the COVID-19 pandemic to worry about, so I haven't really entertained thoughts of going to any card show in the past year or so - maybe I shouldn't make a big deal about stopping at a place where there might be like minded vendors selling their wares.

As I got to the spot, I was afraid there was an entrance fee but it was only a lady checking temperatures - it looks like everything was outside.

There might have been 30-35 tables and with at least several customers crowding around many of the tables, where it was hard to squeeze into looking into the loose non-showcase cards put out - I was probably looking for more of an old school baseball vendor with dated material I can dwell on, maybe some junk wax / mid 1990s uv-coated era repacks just to see if I can get a bunch of cards as a ‘teaser’ purchase for not much money. 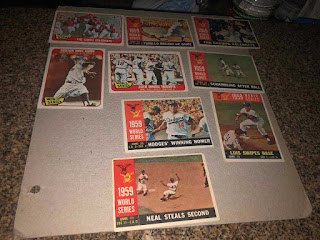 I ended up at some random booth to dig into and started leafing through $1 cards just left out on the table - nothing in card holders, probably off-condition scraps from at least the 1950s through the mid 1980s. 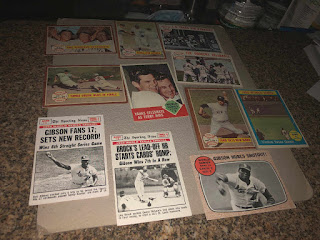 For the most part I ended up grabbing many of the assorted vintage Topps World Series subset cards I could find - as opposed to the regular cards of the related years / players, the WS subsets actually pictured actual action and various cards can be funneled as 'awesome action' adds. 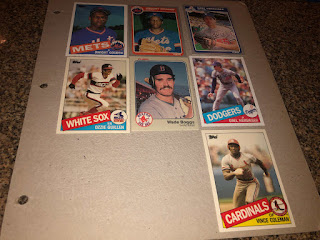 I grabbed these rookie cards and/or XRCs [by 1980s Beckett definition] to my stash - a Hall of Famer in Boggs, a pair of fan favorite types [for the most part] in Guillen and Coleman and a pair of pitchers [Gooden and Hershiser] who had era defining runs as superstar pitchers in the mid 1980s. 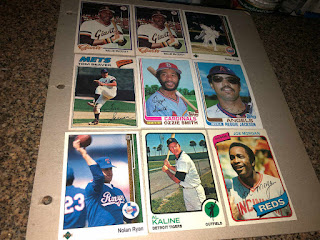 I started building up a stash of cards here and while I didn’t know what I was looking for, was worried the stack had mushroomed to more like 60-70 cards - I didn't even realize I ended up with a pair of 1978 O-Pee-Chee Willie McCoveys, but I found a 1973 Topps Al Kaline, a 1977 O-Pee-Chee Tom Seaver, a 1980 Topps Joe Morgan, a pair of 1982 Topps Traded cards of Ozzie Smith and Reggie Jackson and a pair of 1989 Upper Deck Nolan Ryan cards [I think I already had the multiple exposure version, but not the throwing football version from the high series]. 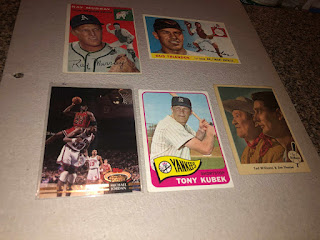 I couldn't leave 1954 Topps and 1955 Topps cards because they feature a pair of catchers - while my tools of ignorance collection cards might be more of a 'side project' compared to other collector (s) whose similarly themed focus is simply more comprehensive, its pretty cool to have catcher cards that are at least 65-years old.

I also found a 1991-92 Topps Stadium Club Michael Jordan, 1965 Topps Tony Kubek and a random card from the 1959 Fleer Ted Williams set - maybe it was tough to decide which were my keepers as I had make some choices on what to put back, but least I found that one booth to get into.

When I whittled things down, I relented to pay $40 straight up for my mash up of cards, which still may have been too much - but after a long year or so, it was fun just to rummage through random cards in-person.

For the rest of the time I spent [maybe an hour or so total], I was walking around looking to see what I maybe able to grab - I was hoping to find someone selling plastic pages and/or magnetic trading card holders, but it didn’t look like there was one table set-up for supplies.

The story I've commonly heard is because of supply chain issues from China through the pandemic - the demand for supplies have intensified where once common items like top loaders command a premium.

Peeking in on cards displayed in showcases, I was impressed with random cool things like vintage 1953 Topps Mickey Mantle, a supposed Babe Ruth cut [I think that is what I saw] that was inserted as part of an autograph repack product, a couple of Michael Jordan certified autographs and a PSA 10 2018 Topps Update Juan Soto gold parallel- maybe not the cream of the crop of sports collectibles, just 'wish they were in my collection' cards I quickly made note of.

There were tables with your typical retail flipper material and I relented to pick up a 2021 Topps Series I Mike Trout tin for $25 - presumably 'new in box,' shrink wrapped with the cards still inside.

The Trout tin might have been a no brainer buy, even if they retailed much less - another booth may have sold similar tins [no Trout] for $35-$40 each.

Out of a small sample size of two vendors I bought from, no bags were provided - I might already be planning my next time and I need to bring something to carry what I purchase.

Those are some excellent buys for $1 each.

The toploader shortage is due to the US company that makes them shifting their production to face shields.