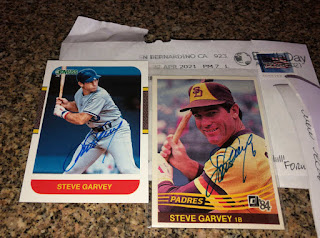 The longtime star first baseman for the Los Angeles Dodgers and San Diego Padres signed my cards in about a couple of weeks for $10 - I've gotten him to sign 4 or 5 times in-person over the past 20 years, but I needed a 1984 Donruss and saw he signed TTM.

The 1984 Donruss was my priority regardless, but I also sent a 2021 Donruss to see what the card would look like autographed - I wish I had an old school Garvey from the 1970s handy to send as a second card, but the straggler might have been ideal to throw in because it was a recent 2021 pull. 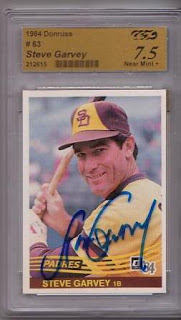 Go figure one of the Garvey autographs I got in-person years ago was on the plastic slab of a graded 1984 Donruss - it was likely at the 2000 National where some wannabe non PSA and/or BGS grading company had samples at their booth for the taking and I ended up with the Garvey.

I didn't have anything better to do with the slab, so I must have taken it where Garvey was making an appearance - after 20 years, I think the card is loose somewhere collecting dust with the autograph probably not as bold due to the cirumstances of time passing.