My experiences with some junk boxes of doom 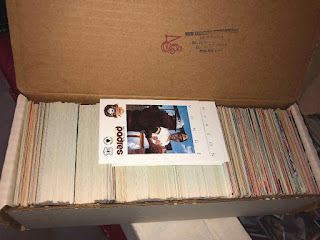 Things were slow at card show I went to, so I ended up meandering around the card shop's [they host the show at their storefront] bargain tables and was digging through these boxes with these ratty old junk wax era cards - I know better, but I'm one of those guys who would seek out what may have been someone else's trash and actually pay someone to take it off their hands.

I waited until the store owner walked by and asked him how much the boxes were - I think he said they were priced as marked [for everything in the box] and I could go through them as well.

I get jealous of those who can buy bulk collections for $20-$30 and while this isn't one of those deals - I guess it can't be worse than picking up four Fairfield repacks. 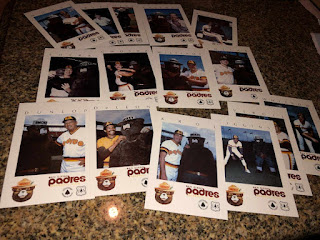 There was a partial 1984 San Diego Padres Smokey set [15 of 29 cards] - maybe that is where the Tony Gwynn and the San Diego Chicken I saw in one of the shop's showcases came from, but a card of general manager Jack McKeon was among the cards and I able to send it off and get it signed TTM. 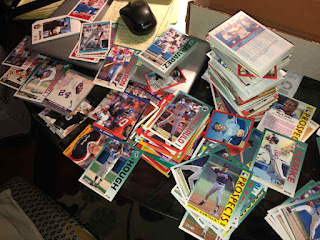 I think I'm the only one crazy enough to sort through and try to make sense of these cards - this box had a good run of 1992 Fleer which may have been a 'meh' set after the fact, but anything would have been an improvement over the previous year's set where the base cards were a little bit nicer and at first felt like a premium release. 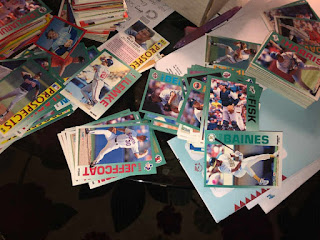 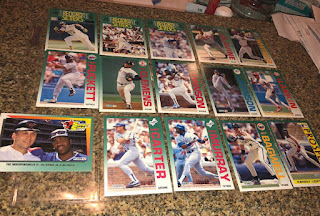 To sort the cards out, what I did was try to look for obvious or not so obvious 'mini-collection' hits, maybe binder material for my decade stars collection, cards I can dump as team box material and the rest - even if we are talking about kindling for the fire, I want some generally 'clean' cards, so I set aside most cards with blemishes or had succumbed to the natural circumstances and just tossed them. 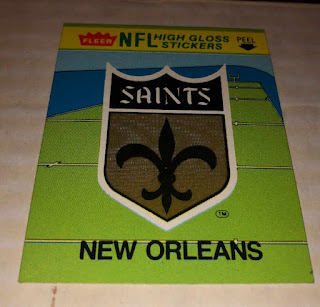 This doesn't mean anything in the grand scheme of things, but I found this old New Orleans Saints sticker - probably something I would have thrown away. 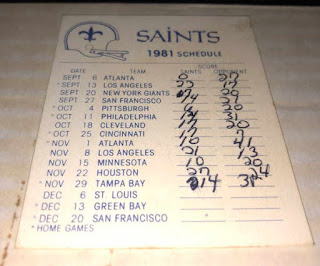 In the back of the card you can put in scores according the schedule - I guess someone did that through a certain date and maybe this card is a reminder that these cards were actually a part of someone else's collection. 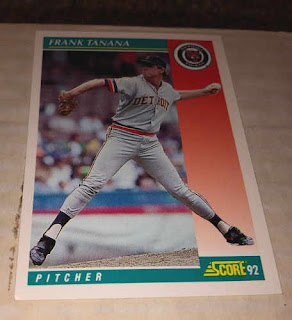 I remember buying a complete set of 1992 Score just 5-6 years ago - I don't know why it matters, but a card that seems to have disappeared was a Frank Tanana.

Maybe my 'original' copy will show up somewhere, but I was happy to find another one - why does it matter again why I have it in my head, I lost a 1992 Score Frank Tanana? 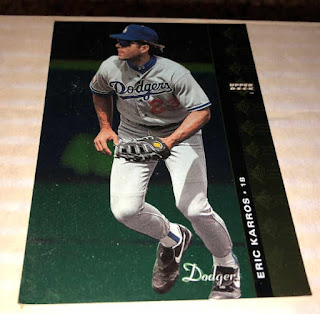 I don't know if I really found that deep run of odder cards, but this 1994 Upper Deck SP Eric Karros was one. 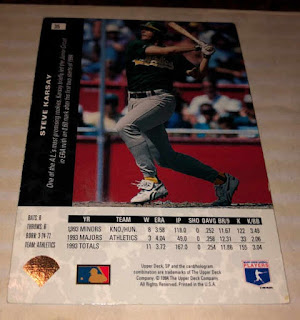 It's actually a wrong back card and when I turned it over, the card back was for pitcher Steve Karsay.
Posted by Laurens at 7:30 PM
Labels: 1992 Score, card show trip, decade stars, junk, junk wax era, mini-collections, random, team boxes

Those are good experiences and what makes collecting fun. See, you found a few minor gems in there - cmon, a Smokey the Bear Padres set?!?