Trying to catch up with some vintage hauls 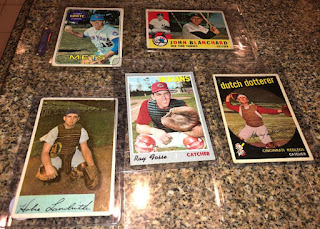 I was idly rummaging in the vintage box at a table at my card show, looking for some keepers and go figure, I had a small run of catchers' cards going - I may have looked over the second-year 1970 Topps Ray Fosse [R.I.P.] card in a previous dig, but made sure to grab it this time around after he had passed away.

When I was still getting big league autographs in-person 10 years ago - I remember Fosse making time for collectors and one time he was telling someone on the field "I've got to [come over] and sign these vintage cards."

I was thinking he made them sound like they were ancient - they maybe old from the 1970s, but not that old. 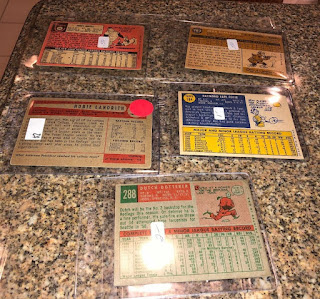 I like the idea of being able to grab old cards that may not be in the greatest shape and make them keepers - where I've created a little 'grab bag' mix for myself as far as impulsive pick ups for mini-collections and other loose card projects. 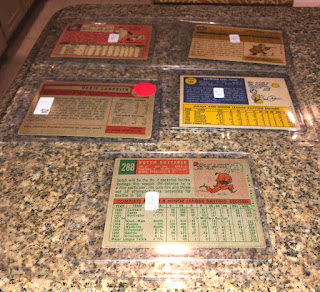 The oldest card is a 1954 Bowman Hobie Landrith #220 - maybe the card to be squirreled away somewhere [away from my other tools of ignorance cards since it's a little larger pre-1957 issue], but go figure he is still living and apparently is still signing autographs through the mail for a fee.

I sent the card off to presumably his mailing address and $5 - just to see if my card would come back signed. 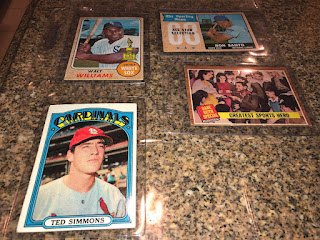 The other cards include a second-year, non-catcher card of catcher Ted Simmons, a Topps subset card of Babe Ruth, an all-star subset card of Hall of Famer Ron Santo - I also picked up a card of Walt 'No Neck' Williams, who I remember reading something about in a book of baseball cult favorites, so while I'm not going to nerd out about everything 'old,' I may be aware of random notables. 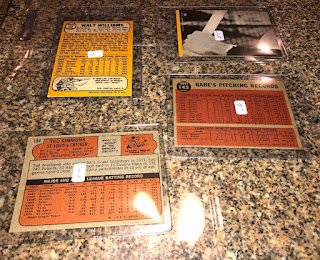 The most I spent on a single card was $5 on the Ruth - I wanted to salvage this vintage Topps card because Ruth is the iconic player in Major League Baseball, though it also has him signing autographs so it's a nice addition to my 'inking it up' mini-collection.
Posted by Laurens at 1:00 PM
Labels: card show trip, mini-collections, MLB, old school, random, tools of ignorance, vintage

That Dutch Dotterer is one of my favorite cards from the '59 set, easily in the top 5!