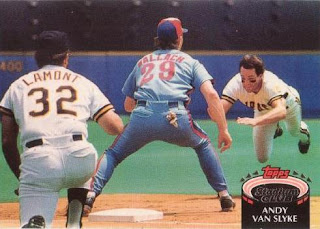 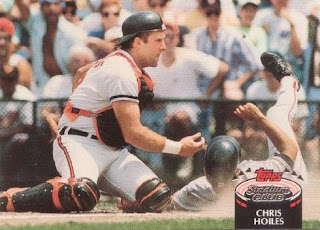 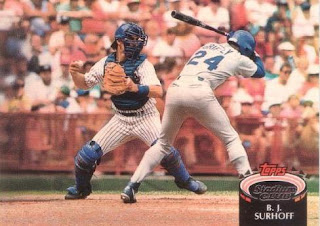 Topps' sophomore effort may have as impressive and/or better images than their first release in 1991 - the problem for me was Topps turned Stadium Club into a bloated 900 card set, issued in three series of 300 cards. It was the first Stadium Club product I remember picking up with some sort of regularity, but it also became this monster, clusterF of a set littered with unproven players and players who'd be the 25th man on a roster. It should have remained a 600 card set like the initial release in 1991, but Topps thought they could capitalize on the initial popularity of the 1991 set.

The Van Slyke [card #232] features a very nice horizontal shot of Van Slyke diving with a head first slide at third base - you can see Pittsburgh Pirates' then third base coach Gene Lamont kneeling to see what will happen as third baseman Tim Wallach of the Montreal Expos presumably awaits the throw from the cutoff man. The only reservation is the photographer is able to catch Lamont and Wallach's butts lined up with the image of Van Slyke's impending slide.

The Hoiles [card #161] features a play at the play - we don't know if the runner is safe or out as he crashes home, kicking up dirt as Hoiles is looking for the baseball.

Surhoff [card #117] looks like he is making the throw on a pickoff as Ken Griffey Jr. tries to get out of the way - I can eat up 'bonus babies' or common cards featuring cameos by stars all day long.

One thing I've noticed as I've been looking through my Stadium Club cards recently... There are a ton of horizontal cards and almost all of them have fantastic photos.

I think Stadium Club made best use of the horizontal shots.