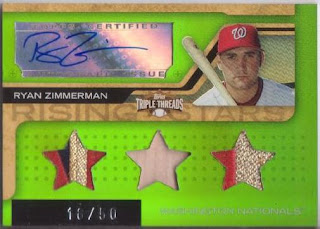 I was looking through stacks of cards at a twice a week card show and saw a 2008 topps Triple Threads autograph/patch/bat [serial #'d 18/50] of Ryan Zimmerman - it was $15 and I wasn't going to pick up, though I thought the patch pieces popped out.

One of things I want is build up a 'scavenger's personal collection' of cards - which is to say I'm looking for singles [autographed, game-used, rookies] in the $10-$40 range I can probably put away in my collection for the next 10 years.

I'm not a Washington Nationals fan by any means and I would have left the card alone - if it featured someone like Dmitri Young, Cristian Guzman Austin Kearns, Paul LoDuca or some other mediocre player the Nationals have put out on the field in recent seasons.

With what I typically pick-up [scrap commons, maybe a random pack or two or something else] at a show I wouldn't be able to pick up something nicer than the Zimmerman - though the card does seem a little gaudy. The green just doesn't do anything for me, aesthetically.

The autograph featured on a card was on a sticker - and the autograph seems typical of what the style of autograph he has signed for trading card companies in the past year.

PS: I probably get about 10 page views per two days compared to hundreds for probably some bloggers, each day - but my Internet connection is screwy at best and I have not updated the blog as much as I probably can.

At the very least, I probably haven't been able to visit my favorite card blogs with regularity - to see what other collectors have to blog about lately.
Posted by Laurens at 10:56 PM
Labels: 2008 Triple Threads, patch, Ryan Zimmerman, Washington Nationals