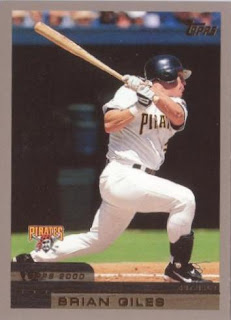 I don't pass judgement on anyone [like athletes in a sport I'm a fan of] other than the fact - San Diego Padres outfielder Brian Giles was caught on tape [grabbing his girlfriend and throwing her to the ground] and it looks like 'it is what it is.'

Now his ex-girlfriend's lawyer is suing him and had just released the tape - since this happened in 2006, it had already been swept under the rug or people were just oblivious to it.

Giles seems like a 'wild and crazy' guy [I've seen a clip of him running naked into Tom Glavine, Greg Maddux and John Smoltz interview] - but since he is generally is considered a model citizen on the field, I don't know if he can 'cross over,' like only a few athletes can where there is some genuine scorn whether or not he fits the stereotypical athletes, the mainstream media really likes to make examples of [and I'm not talking about a crackhead like Matt Jones in the NFL who we have not heard one peep about].

The typical response from the peanut gallery [not that I consider myself above the fray] would probably consider the ex-girlfriend a gold digger - and feel like let's not all just jump on Giles because all the facts have not come out yet.

However, it seems no amount of evidence would convince the fan base otherwise - certain athletes like Giles are capable of such committing such disturbing behavior.

If we are not talking about someone we personally know, but someone we admire or watch like a professional athlete - that maybe the most disturbing aspect when things like this come out for public consumption.
Posted by Laurens at 3:43 PM
Labels: Brian Giles, political post, San Diego Padres, sued