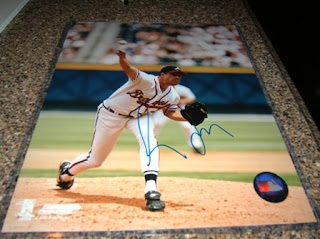 Greg Maddux signed this autograph in-person when he was still with the San Diego Padres a couple of years back - his autograph has never been much, but I was glad to get him anyway.

In the last part 10 years of his career Maddux has seemed to be under the radar, but with Roger Clemens' career 'tarnished forever,' Maddux maybe considered the greatest pitcher of his generation - it says something that Maddux was at his very best when offense in Major League Baseball was booming and Clemens was sputtering in last four or five seasons with the Boston Red Sox.