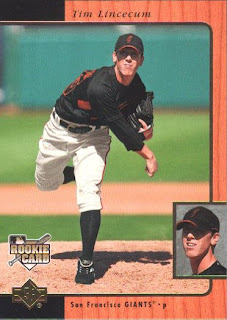 My parents have both become baseball fans, probably because of the Angels run to the World Series championship back in 2010 - as opposed to being completely oblivious to the sport [dad's favorite spectator sport is the NBA and the Los Angeles Lakers], now they have a passing interest in Major League Baseball, bandwagon fans or not.

My mother down on the couch to get a breather after work with Game 4 of the National League Division Series [San Francisco Giants vs. Philadelphia Phillies] on TV - I just rolled my eyes 100 times when she asked if Tim Lin-CACK-UM was pitching in the game or not.

It wasn't even the fact the game was in the late innings, but how my mother butchered saying Tim LIN-suh-come's name - I guess I pride myself in familiarizing the pronunciation of most names and maybe Lincecum isn't a common last name, but are you serious?

Maybe I have issues, but I would have been goofing all over my only friend in the world if he said Lincecum's name the way my mother had said it - it was a silly, cringe worth moment, though probably won't be remembered after the postseason is over.