Through COMC, I've picked up assorted cards in bits and pieces to fill holes in my loose card projects - while the Web site is still an option for finding cards, with COMC's shift towards eBay consignments over the past year, shipping wait times for stuff bought on COMC are longer unless an expedited option is chosen.

My latest order cards were shipped through their Black Friday promo and while it took three weeks to finally get my cards - the Web site gives an estimated time of when to expect your cards, so I knew what to expect. 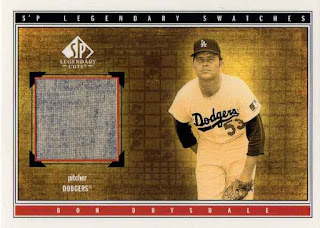 I'm still whittling away at an award winners collection and to upgrade the 1982 Topps K-Mart #42 I have for Don Drysdale [1962 National League Cy Young] - I picked up a 2002 SP Legendary Cuts S-DDr relic card for $7.

I figured the card adds a wrinkle in my collection - even though relic cards have been proven to have iffy historicity and aren't really valued as much.

Compared to a dingy, 35-year old card from a boxed set produced in the billions - I'll keep the cutesy one with the supposed game-worn swatch. 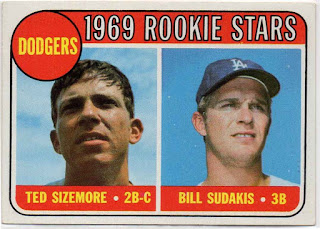 I picked up a 1969 Topps Dodgers Rookie Stars card [#552] for a dollar because it features Ted Sizemore [1969 National League Rookie of the Year] - I could have gotten his better looking second-year, single player card [1970 Topps #174] featuring the Topps Rookie Cup, but instead I just stuck with the actual rookie card. The Drysdale relic is very nice. Nice-looking relic cards are not that common.