There are distinctions over the kinds types of cardboard I’d be inspired to pick up - even if YMMV where the different cards I find may mean nothing to other collectors.

I worry about the perpetual glut of cards and being caught dead in my bloat, but I can’t take things too seriously and as much as it leaves me out of control at times - I’m always going to look to buy loose cards with the mindset I want it all [even if that isn’t reality] and dwelling on the idea I need those fresh stashes of cards to go through, even if it isn’t the latest and greatest.

These were the results of a '2 for $1' card show dig several weeks ago - out of a few times, I've stopped this seller's table, he has plastic pages of $2 / $5 base cards for at least a couple of local guys that were easy to pass by.

A box of loose cards was staring me in the face and while I didn't think much of it at first - I was looking to make something of my idle time and started to dig around past the unlicensed ACEO stuff, various Phil Nevin and Gerrit Cole cards. 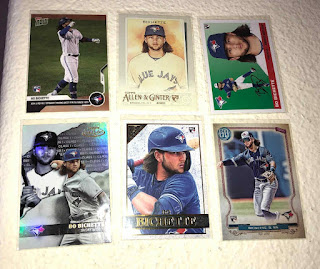 A small run of basic Bo Bichette rookies - he's not quite the probable AL MVP runner up, but has had a pretty good season to build on. 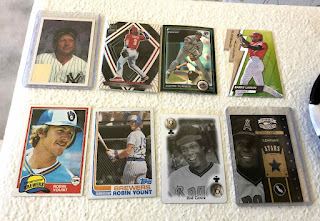 A mixed bag with a pair of old school Topps Robin Yount cards, a Mickey Mantle, a super thick Bryce Harper, a Justin Turner rookie that almost looks like a refractor, a die cut Barry Larkin, an oddball playing card of Rod Carew and another Carew insert. 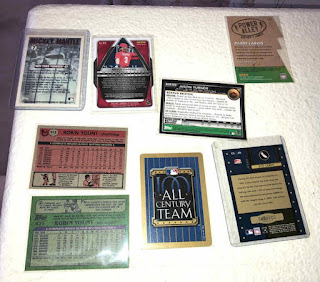 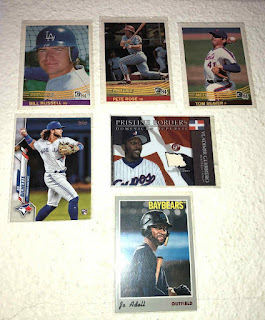 A trio of 1984 Donruss, another Bichette rookie I didn't squeeze into the other picture, a Jo Adell Topps Minor League Heritage and a jersey relic card of an old Montreal Expos guy. 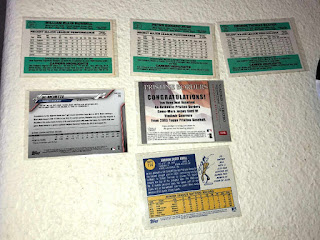 Not bad! I like Bichette too, and that Carew insert is quite nice.