Mildly annoyed by these pickups 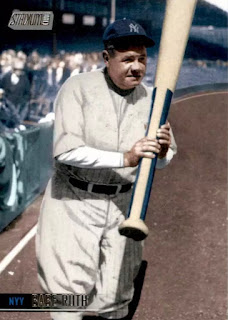 I had to pick up this 2021 Topps Stadium Club Babe Ruth #32 - I assume he has his 'game model' bat in hand, similar to what he used to crush home runs with back in his day.

It was in a dollar box at one of the tables at my card show and figured I might round up some other cards that I didn't want to pay a dollar for but cards I decided I like regardless of value - when I was about ready to make my purchases however, the table was unmanned.

Maybe it's not a big deal, but I had to keep my eyes peeled wondering if someone would come back to the table - I was about to go on a big junk wax dig of loose cards from another seller, before excusing myself for a moment just to grab the dollar cards I wanted when I finally saw a person sitting at the table.

Even as I dug out $5 and was ready to pay, the seller was really chatting up someone else on his phone and I had to gesture towards his direction - where I was barely acknowledged as I paid up. 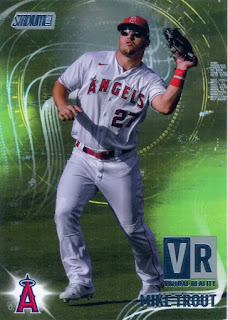 A random 2021 Topps Stadium Club Mike Trout insert - he's still 'the man,' but after a pair of lost seasons, there maybe some uncertainty about all time great numbers he is going to put up going forward. 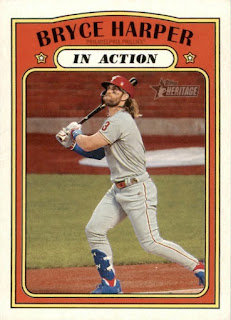 With this 2021 Topps Heritage Bryce Harper In Action subset, I'm one Kyle Lewis In Action card away from completing myTrout puzzle that make up the back of the related cards - maybe not a notable accomplishment, but something fun to keep up with. 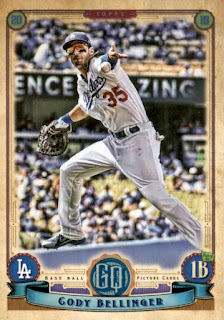 It's probably a quarter card rather than dollar box material, but I like the action on this Cody Bellinger card - where he looks to make a flip throw, presumably to a pitcher covering first base. 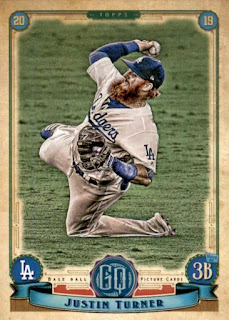 I tried to do some 'research' on this card and this looks to be a throw from the third inning of Game 3 of the 2018 World Series - where Turner is positioned in the shift and Jackie Bradley Jr. of the Boston Red Sox gets an infield single anyway.
Posted by Laurens at 9:57 PM
Labels: card show trip, dollar box, random

I would've put the cards down and walked away.