These were from a card show, where it's more of testament to the types odds and ends cards I can find off a seller that has become a show lifeline - even if it strictly more a transaction at the end of my rummage, maybe it's just nice to go through all these cards with the idea I can take a number of them home.

Stuff maybe perpetually be picked over but I'm bound to find something or a run of things - because there is just too many cards. 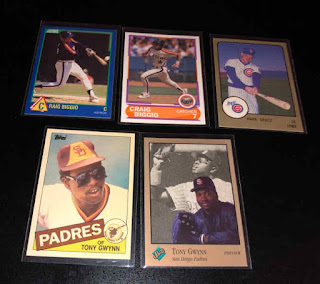 A trio of guys who made their debut in the 1980s, these guys are rubber stamped as decade stars in my book - though Tony Gwynn is probably a personal favorite here, while Craig Biggio and Mark Grace are a little more 'meh' in my eyes.

The 1985 Topps Gwynn is the Tiffany version, though it has a crease that maybe more obvious in-hand, on the back of the card - I don't expect these loose cards to be 'gem mint,' but if at all possible, I hope to avoid picking up anything with blemishes like creases, centering and soft corners.

The 1992 Donruss Studio Gwynn is a preview card, so that's a little more unique - over his base card from the actual set.

While probably 'junk wax' just the same, the rookie year Biggios seemed like nice 'oddball' finds - while the only cards I have of Grace are his assorted big league issues, so a minor league issue adds a little 'pre rookie' card to the mix.

An assortment of cards featuring guys who made their debuts in the 1990s - I've never had the Pacific Net Fusion inserts in-hand [featuring Jeff Bagwell], but I'm disappointment knowing that the material was not likely from an actual foul pole netting from a stadium [if that was possible in the first place], but from a simulated material.

On the downlow, any Adrian Beltre issues are now keepers in my eyes [except cards from his Seattle years] - especially if it's more of a parallel and/or insert that kind of pops.

Edmonds is a 'top guy' for me, more as an Angel - but I do realize he had his peak years after leaving the team for St. Louis.

Aramis Ramirez and Moises Alou aren't necessarily 'my guys' by any stretch of the imagination, but their random relic cards - maybe added as binder material to whatever cards I have for each player.

Garret Anderson is rubber stamped as one of the top guys as far as Angels go - it's nice to find a serial numbered card of his to make as a keeper. 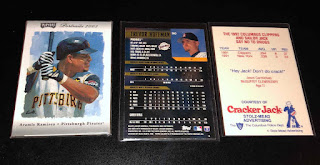 I don't heavily collect Trevor Hoffman, but he is a Hall of Fame closer, so I'll show some love - I think the card I picked up is serial #'d on the back, though it's only worth what I paid.

I don't heavily collect Bernie Williams either, but he was a great player for the New York Yankees, so I'll show some love - with a minor league card that's more of an oddball, even though it was released a couple of years after his big league cards came out already. 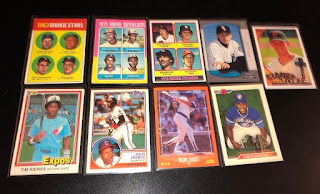 Finally, some rookie cards of guys I might not be too high on to collect outright - but if they are there for the taking, might as well be keepers.
Posted by Laurens at 9:38 PM
Labels: binder material, card show trip, Hall of Fame, inserts, old-school, parallels, random, Rookies

The simulated net inserts are always fun, especially if you can get a good deal on them.