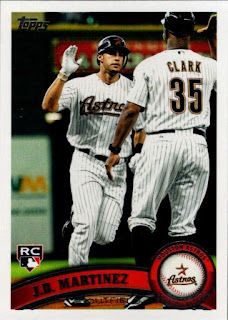 I picked up a loose 2011 Topps Update J.D. Martinez RC #US186 [$10] off a card show table and while he started too late to be a serious Hall of Fame case - Martinez has been a slugging star with a rookie that comes from 2011 Topps Update set.

After 11 years there might be some 'pedigree' that trickle down to notable cards from the set because it features Mike Trout's rookie card - the values doesn't confirm any extra allure however, where copies of the Martinez actually goes for about $2-$5 on eBay, which makes the card I grabbed a peculiar overpay after the fact.

Martinez may symbolize the definition of ironically picking up a single of a player I'm 'iffy' about otherwise - go figure the same day I got my card in my grubby paws, he hit a grand slam in Game 2 of the American League Championship Series, so that was a nice pick to click.

I have one of those picked out to sell at some point. Nice to know it might go for $10