Rummaging through the trenches - Part 2 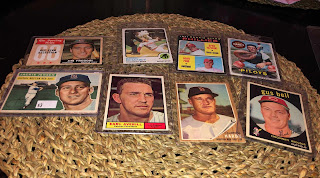 I think I have an unhealthy obsession to be plant myself at a card show table for at least 30-40 minutes if there is material I can get into - I'm pretty casual or even a little 'backwards' with what I'm looking for, but there is an obsession to dig around.

At my card show, I was doing business at a table where the seller has made concessions to bring bricks of assorted junk wax era cards and has them for about a nickel - to change things up, I decided to ask for the off-condition vintage box [kept under the table] to see if I can fish out cards I may have flagged but didn’t seriously consider bothering picking up the very first time I looked through the box maybe 2 or 3 months ago.

I tried to pick out mostly $2 and under for cards that were probable impulse purchases - I didn’t want to blow my wad on old-timey cards of ranks and file guys I wasn't familiar with, maybe high number commons or the odd card of a 'star' player or notable rookie that was priced according to book value [or something like it].

Rather than considering the novelty of the cards as cardboard relics, maybe it was depressing [almost like visiting a morgue] going through 50-60 year old cards - wondering where all these guys went even if they were mostly strangers.

1959 Topps Gus Bell #365 [$2] - this probably goes into my 'bloodlines' mini-collection; maybe things come full circle as I remember picking up a copy of this card [from an off-condition vintage bin] at the 2000 National, but packed it out in an assorted team lot.

1962 Topps Carroll Hardy #101 [$2] - I might have written to Hardy when he was still living and gotten an index card signed; I think I might have learned about him as the only player to ever pinch hit for Ted Williams, but he was also a multi-sport athlete who played in the NFL for one season.

1968 Topps The Sporting News 68 All-Star Selection Jim Fregosi #367 [$2] - there maybe a novelty to vintage All-Star subset cards as opposed to ones from the last 30 years, but the back only features a puzzle piece that makes up a Carl Yastrzemski image.

1969 Topps Larry Haney #209 [$1.50] - this goes into my tools of ignorance mini-collection the reverse negative image makes this card somewhat of an oddity.

1971 Topps Phillies Rookie Stars Greg Luzinski / Scott Reid #439 [$1] - I'm not familiar with Luzinski where I wonder if he was a big time star in his time or just a very good player who put up big power numbers as a slugger.

Off condition vintage display - this among the showcase boxes of loose cards grouped by category on the table rather than hidden away.

1956 Topps Jackie Jensen #115 [$3] - after all these years, this post from The Baseball Card Blog lingers in my memory banks. 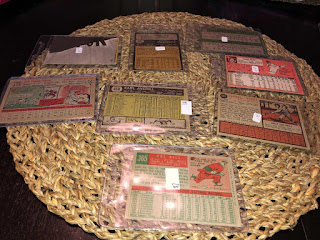 I occasionally have my rabbit ears going and could overhear the neighboring table / buddy wondering about me lingering around for so long, probably giving me the side eye - I think the seller said, “that’s OK, he actually buys stuff off my table.”
Posted by Laurens at 3:10 PM
Labels: card show trip, mini-collections, MLB, old school, random, vintage

Those are nice looking cards for "off condition".