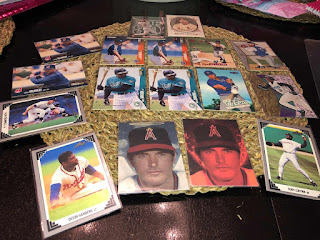 Thinking about all the 'other' blog posts I've read, I want to attach these narratives where it's always a sublime experience - where I have these show within a show, table-to-table tales to unearth these assorted hauls I get to take a photo op when I get a moment to breathe, account for and try to make blog posts about.

My card show experiences however are not unique at all where I feel like more of a mark than anything else - I show up to a spot where there are tables that might sell material I can rummage through and see if I go through cards as a 'fun time' thing to get away [from reality] for several hours and get my fix.

I raided the quarter [if unmarked] box at a table where the seller has made concessions to bring bricks of assorted junk wax era cards and has them for about a nickel - nothing too earth shattering but some fun stuff to help me re-focus on the lighter side of things.

I don't know what these Nolan Ryan customs are supposed to be and I kind of turn my nose at anything unlicensed and/or looks like they were printed at home - on the other hand, these do almost feel like actual cards and duality between the 'Angel' Ryan and presumably the more 'devilish' Ryan is intriguing. 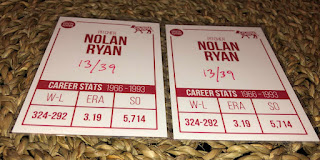 The cards have actual backs and are both numbered '13/39,' whatever that means in this instance - I guess I'll make the concession to keep this pair of neat cards as binder material of Angels Ryan cards. 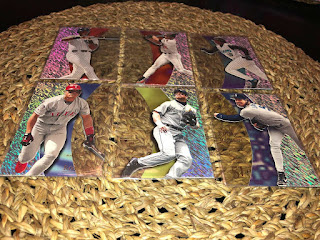 I had to grab the 1998 E-X 2001 cards I could find - these acetate cards really pop and even if they were merely base, the kind of contemporary [yet already 24-year old] cards I'm hoping to find more of whenever I rummage around cheap-o bins. 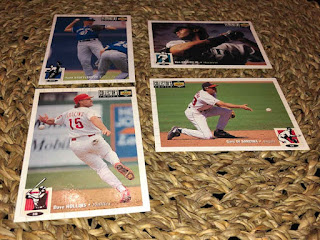 These 1994 Upper Deck Collector's Choice cards were not quarter material but I decided I liked them enough to throw them into the mix 'as is' - maybe the Ken Griffey Jr. and Gary DiSarcina have surface blemishes, so these copies of 'junky cards' might be fillers. 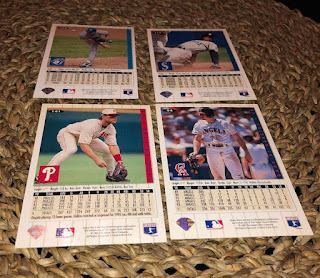 I thought the Todd Stottlmyre card shows a pitcher fielding ball during a game, so I've made those keepers - but he has his batting practice jersey on and presumably he is having fun before the game.

The Dave Hollins card looks like he's caught in-between the basepaths, but I still consider it a keeper for my 'base running' collection - though I wonder if the retro uniform he wears on the reverse image makes it more of a card for my retro uniform collection.

Those Ryan cards are great!