Rummaging through the trenches

At the monthly show I go to, I've made a couple of tables the only ones I really go to - one has their dollar boxes of doom and the other has a lone 3,200 count dime box of mixed sports
I really tried to make a beeline for the dollar bins of doom the moment I hit the floor - but there was 6 people going through assorted stuff at the table and I just kind of had to wait around.
I got to working through a box off to the side, but it was mostly football and/or basketball - there is definitely a set of regulars as I've seen where one of the ladies chats them up and even offers to take down their handles for her [?] Instagram account.
I'm just another guy who basically tries to keep his head down as I go through all these cards - but that's OK for now.
Go figure, another seller I've bought from at another show was there digging around as well - while don't know him well enough to greet him even informally, it's quaint where I see this guy buying [maybe $20 worth] of cards for himself.
Honestly, I don't know if I was really finding fresh material where it was more of a chore to look at a row of cards - same bloat of Ken Griffey Jr., Derek Jeter, Frank Thomas, Cal Ripken Jr., other baseball, football, basketball cards that may have gotten to be redundant.
I still spent about a couple of hours just digging around at the table, adding more to the pool of cards I might pick up - being holed up in a packed room with people but no A/C, maybe it was getting to be really stuffy, especially wearing a mask.
I don't know if I could take a moment to breathe fresh air - as I'm literally going through cards, maybe I'm really getting spacey where the physiological is messing with the psychological.
As the case has been lately, I just have to move on - whether I want to or not.
Next time, I might need to give myself time to get some air as well bring a water bottle - something handy that I can drink from on a whim without going out of my way looking for something to cool me down. 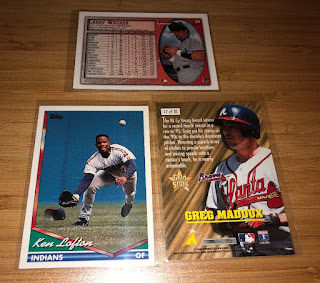 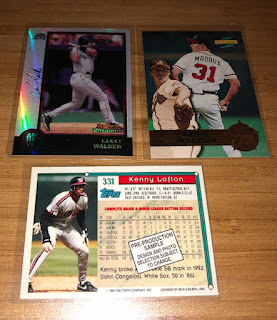 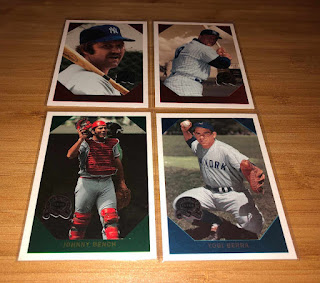 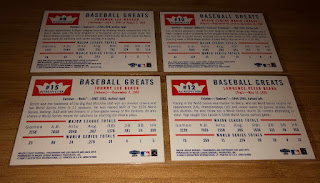 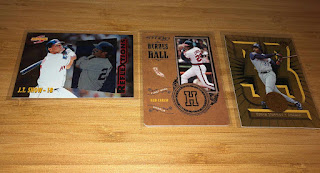 I like collecting regionally but may place less emphasis actually hunting cards for my team where I question my sanity if I'm not chasing after the latest and greatest - on the other hand, maybe an 'unofficial' mission is to come up with at least one 'lousy' Angels card, where I don't even see myself as a team collector outright, but the occasional parallel and or insert brings me some satisfaction [even if the players and cards are simply dated]. 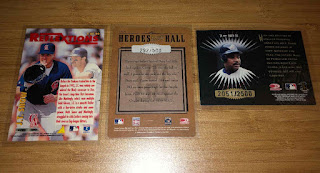 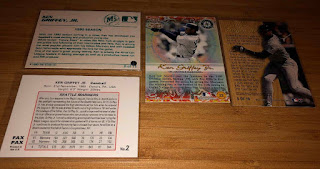 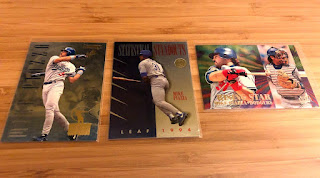 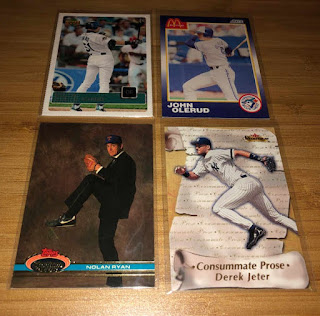 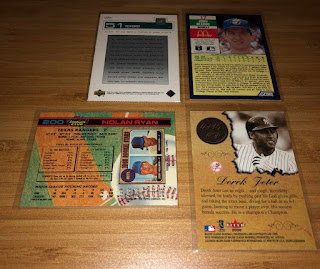 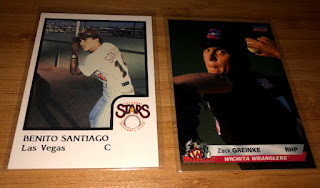 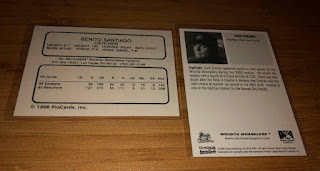 Minor league curiosities
1986 ProCards Las Vegas Stars Benito Santiago #NNO - his potential to be a catching star with a lasting legacy faded when he started to bounce around in the early 1990s, but Santiago still had a significant playing career regardless and his 35-year old minor league issue maybe just too odd to pass up in the wild.
2005 Choice Wichita Wranglers Zack Greinke #NNO - though there seem to be obvious identifiers at first glance, I'm not quite sure which set this card is really from; by 2005, Greinke was in his second big league season and I wonder if the card came from an actual team set or maybe part of a commemorative tribute set that are sometimes issued. 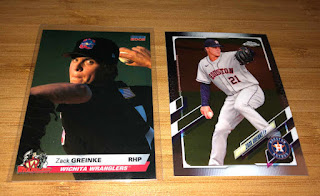 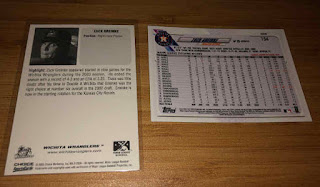 I paired up the Greinke minor league issue with the newest card of his I pulled - for a little 'then and now' showcase of cards printed 17 years apart. 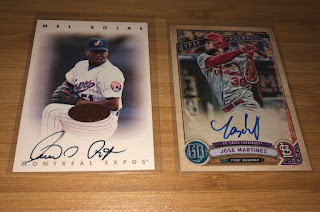 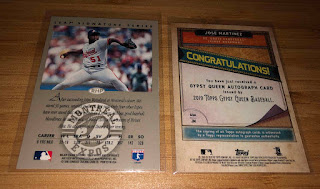 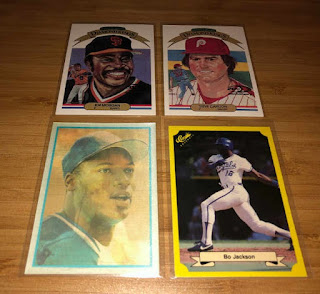 These are cards I probably left the last time I was digging around - where I made it my duty to see if I can salvage them if I saw them again. 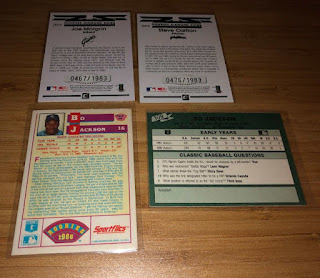 I'm not as big into retro cards of legends just to have them in hand - but the Diamond Kings reprints [which are actually 20 years old] added modern touches [glossy and serial #'d] to the original issued cards and might be nice to squirrel away.

I'm not sure I fall in line with the other old heads who get nostalgic over 'Bo' because I'd seen him as mostly a big leaguer whose baseball career was prematurely derailed - but maybe I'm just not about my junk wax era roots if I don't pick up a pair of rookie era Jacksons. 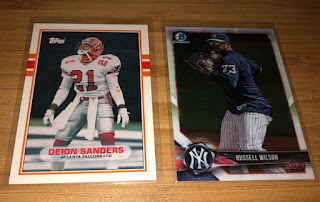 In addition to the Bo Jackson action, I ended up with a couple more cards of multi sport guys - in the early 1990s I may have wanted a 1989 Score Deion Sanders rookie card, though honestly it was mainly due to being more of a personality than it was being a football player or baseball player. 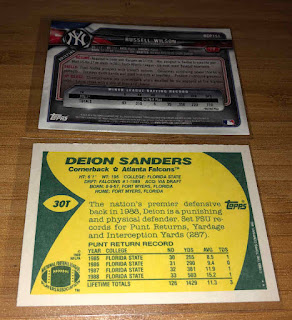 1989 Topps Traded football Deion Sanders RC #30T - this isn't quite that 1989 Score but it will have to do.
2018 Bowman Chrome Russell Wilson #BCP151 - his legacy has been cemented as one of the best quarterbacks of his era, though there has been some uncertainty for his team the past couple of years and he looks to be out at least a month after injuring his finger.
Posted by Laurens at 11:00 AM
Labels: card show trip, dollar box, random

Consummate Prose Jeter is such a great card.

Sounds like that gal is trying to flirt up some more sales, and knowing most card collectors, I bet it works too!