A name your price rummage

At my local card show, there was this random table with a random monster 3,200 count box of cards that was of interest - I asked the seller how much the cards were and he said it was just stuff he was tried to get rid of, so said to pick out what I liked and maybe come up with an amount.

I saw the box as probably a quarter or dime box material at best, but who knows [?] - I'm almost 'that guy' who like to dig through more of a seller's 'discard material' just to see if I can find some odds and ends.

I grabbed a trio of Angels regional issued oddballs from 1992 - I think I left a Chad Curtis and a Luis Polonia because I wanted the more notable Angels in my book, not the more unsavory ones.

There was a bunch of early 1980s cards in the box, but it seems like every other one was water damaged and dried out - if only the cards were in better shape, maybe I would have much more patience to really build up a quantity.

I didn't know what I maybe charged per card, so I wasn't as impulsive - I only really grabbed 13 cards total and gathered the courage to get the seller's attention as he was sorting some singles at the table.

I handed the cards over and he flipped through them and asked what I may have wanted to pay.

I really wish he would have agreed to the $5 or just said take the cards for free - but I relented to pay $10 because I spent 20 minutes digging around and maybe sometimes I have to follow on my interests, even if on the impulsive side.

Newer Topps Heritage cards - the Kyle Lewis In Action subset was a find because it completed the Mike Trout puzzle on the back of related cards. 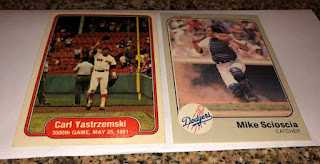 Early 1980s Fleer was abundant though most were water damaged - I grabbed a Carl Yastrzemski tipping his cap and while a common in my book, the play at the plate, action shot of Mike Sciocia might be too hard to resist. 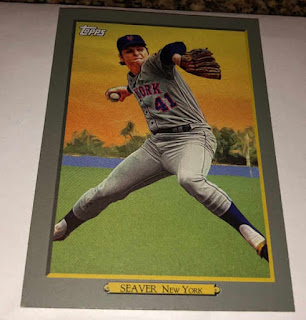 A Topps Turkey Red Tom Seaver insert - I'd rather go for 'here and now' players, but I want to make it where I can show interest in old timers as a nod to the history of greats of the game. 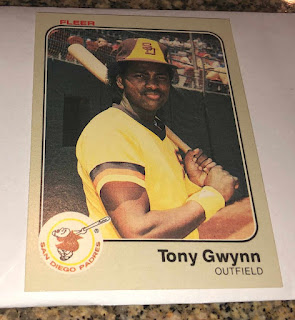 A random Tony Gwynn rookie card that kind of looks fairly clean - though the upper portion of the card may actually be a little 'bent.'
Posted by Laurens at 5:09 PM
Labels: card show trip, customs, mini-collections, MLB, old school, random

I do love that Turkey Red Seaver, though. One of my favorite recent cards.

Ooh, I haven't seen that Angels before. Nice pickup.

I hate paying too much as well, even though I've had my share of bargains over the years. In situations like that, I'll pick out a few if they show up quickly and then ask "What have I got here so far?" Then if the figure is close to what I expected, I'll keep going thru the whole thing. If not, I'll maybe pick out one or two more and cash out or if it's only a couple, I might put 'em back and move on.