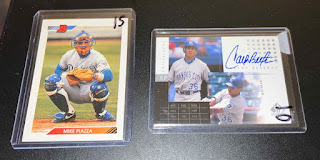 So at the card show where the last two posts worth of cards came from, I went back to table with what I term the dollar boxes of doom - through 2021, I was all about raiding those bargain boxes when I could get to them, but perhaps the relative quality had dwindled.

I didn't think I'd see the day where the dollar cards were now $0.50 each, but maybe the seller was preoccupied by other things - however my interests have shifted where I'd rather look for impulse purchases out of the scattered singles [$5-$20] boxes.

As is who knows if I can count on seeing cards I may have flagged in months and months ago - being generally in the same place, whether displayed in one of the showcases or in a box.

I plucked an MLB rookie year Derek Jeter insert and an Ichiro rookie year card, though I wasn't enthused about what I was finding - I thought this seller would have all these boxes of 'interesting' cards, but maybe it just depends on collections the person purchases, what maybe left and what he decides to put out.

I found a 1992 Bowman Mike Piazza RC #461 and while I really wanted a graded copy as part of my scratch the itch list - a loose, unslabbed card was in my wheelhouse as a notable single pick up where I'd rather have the card that not.

I still remember buying loose jumbo packs of 1992 Bowman for $12 each at least a few times off a random seller at the show that still runs at least a couple of times a week - after the fact, I don't think I pulled one notable player or rookie so maybe there was a sequence where pulling cards of note was a no-go.

I found several copies of the Carlos Beltran certified autograph card and while he has a Hall of Fame case with the career numbers that merit eventual induction - he may never avoid questions about his role in the Houston cheating scandal in 2017 and his firing as a New York Mets manager, before he even got to manage in a game.

As I considered making my singles purchases, I was absentmindedly digging through the $0.50 boxes - where I was trying to think about the combination of singles I'd relent to pick up, I just grabbed the Piazza and a Beltran for $20 to have a couple keepers beside all the other bulk cards I picked up.

One day I hope to add an affordable Bowman Piazza rookie card to my collection too. Like you... I'll settle for a raw copy to hold me over.

That's by far the cheapest copy of that Piazza I've ever seen! I'm not a huge collector of his, but I would've had a hard time passing it up at that price.

I didn't realize until just a couple of years ago how desirable that Piazza was to a lot of collectors. I never thought of him as being someone that a lot of people collected, but I guess I was wrong, because that card always seems to sell well, even more so since the boom started.