A slice of card show miscellany 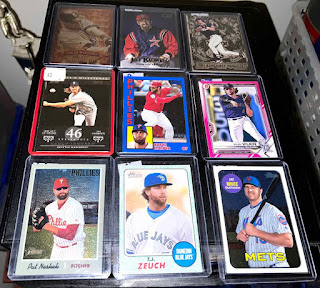 I was able to attend a couple of card shows last weekend and maybe the routine is taking a little breather where maybe boredom does set in - on this particular outing, I've bought assorted bulk cards, some dollar cards and a couple of low end singles, but I don't know if I can make my way back into the dealer room, where I just might be done for the afternoon.
However, despite feeling like this maybe it, it's almost a challenge - where I do want to go around and see if there is still at least a table or two to find some keepers.
I found a table with some $0.50 boxes to dig through - there may have been a small stack of 1999 Fleer Sports Illustrated cards that had some nice images but they weren't priced as commons.
The seller was packing up his display case and I probably decided to move on - but came back around when it looked like another collector was on a mission, searching deep and pulling cards out of the other boxes at the table. 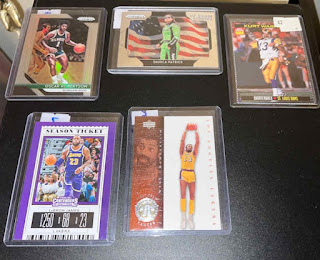 I figured as long as this other guy [and then another collector] was still rummaging through assorted cards - I would do the same thing as long as it wasn't awkward where the seller was waiting on only me.
The seller started putting some slabs back on the table - maybe just killing time seeing if he had any more bites while people were still lingering.
I thought something peculiar was happening behind the scenes where maybe it was a guy the seller knew buying him out of the very boxes three people at the table were going through - the seller seemed to get angry for a moment where he told the guy to “get outta here,” but was only really joking around and it looks like money exchanged hands.
I could see where the probable buyer was telling the seller to wrap things up as is - where he probably didn’t want anymore people go through the cards that he may have just bought in bulk.

"This will be it," the seller said to the other guy. 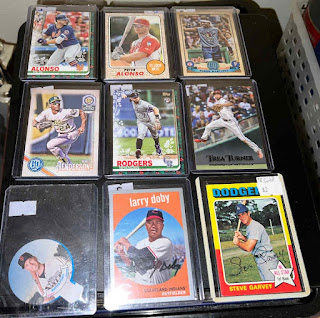 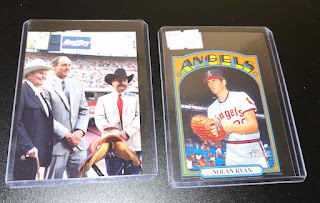 It looks like I found a photo print of Gene Autry and Nolan Ryan sized into a trading card - regardless of how I feel about unlicensed cards or cards printed out of someone's garage, maybe the 'lil photo was too odd not to make a keeper. 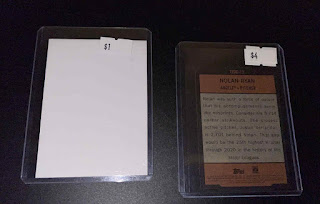 On my own, I dug out about 30 cards from the dollar bins and while I didn't consider all them dollar cards - I figured I didn’t have time to play around and weed out 'lesser' cards to leave behind.
“Can’t really lose for a dollar,” one of the other guys looking through the cards said.
I presented my cards to the seller and even picked out 12 of the $0.50 cards I was hesitant on buying - maybe I should have just grabbed a handful of the non-dollar cards, because when I tried to show them to the seller, he gestured to let me have the cards and said "I’ll make you happy and give those to you." 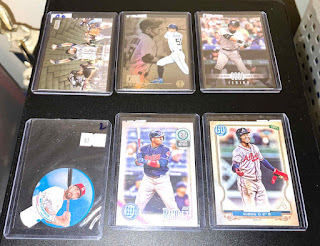 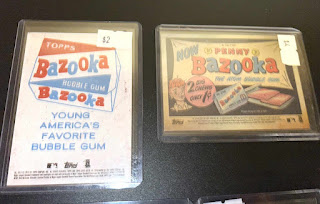 Always a thrill when sellers decide to give you free cards. Nice pickups all around, especially that Neshek!

Wow, I've never heard of anything like that happening before. Lucky you!