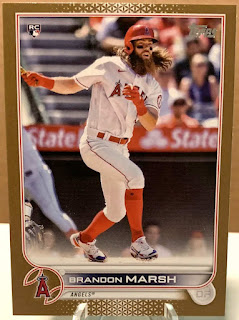 I picked this 2022 Topps Gold parallel up for about $10 after paying $40 another copy of the card [bundled with a couple of base cards] earlier in the year - maybe with the last purchase, I thought I was buying low where I thought Marsh had some upside for the Angels.

Go figure he was traded to the Philadelphia Phillies and my pair of rookie-year centerpiece cards for Marsh probably gets lost in the shuffle within my regional collections - along with scattered cards of players who never quite delivered on their promise as one-time Angels prospects.

Entering 2022, I was wondering if Marsh's potential was more of 'good every day' player rather than an all-star type, since he's 24 already with the elite prospects breaking into the big leagues at 20, 21 or 22 years old - while Marsh's bat has cratered, maybe he could be a Jim Edmonds type where he taps into his ability to hit for average and power, though probably not to the extent where Edmonds evolved into a 25-30 home run slugger.

Marsh seemed was a pretty good defender in the outfield, always paying attention, hustling and seemingly making all the right plays where teammate Jo Adell can be a disaster on a game-by-game basis - there are Angels fans who would have preferred to give up on Adell, but in sort of a surprise, Marsh was the player sent off.

He looks like he would've been right at home on one of those old House of David teams.