On a card show trip, maybe I was not really enthused about the vibe in the room where there were not as many sellers and things seemed slower - I stumbled upon a random seller with at least several monster boxes of assorted singles individually priced [at least $5 or more].

I tried to dig around and see what may catch my attention, maybe I wonder whether the material is passable or not - the seller said something about making offers to consider, so there was an opportunity to pick something up where this table might be it as far where I was going to spend most of what I had in-hand.

I found these three cards first and offered $10 for them - an old school rookie card of Keith Hernandez, a short print variation of Babe Ruth and a bat card of Tony Oliva. 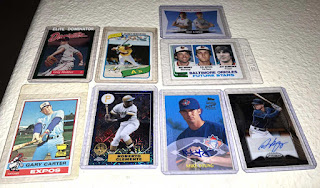 After trying to go around the room, I came back to the seller's tables where maybe I'd find more cards - I found a little mix of cards I tried offering $20 for, though the seller expected more and I ended up paying $30.

Among the odds and ends included a second-year Gary Carter - I want to follow the mature collectors who have tried to make something about collecting old-school and/or vintage cards, even in bits and pieces.

A rookie year certified autograph of Michael Young - he was a second baseman who last played 10-15 years ago and was underrated as a longtime hitting star.

A certified autograph of Andrew Velasquez - even though the autograph on the sticker hologram looks sloppy, I picked it up for my all-time Angels collection.

While completion isn't realistic - it's cool knowing I have the most random players' autographs that played for my home team.

A Roberto Clemente insert that was too shiny to ignored - I'm not sure if this was numbered, but I like how it pops.

A Mike Trout / Shohei Ohtani insert I thought might have been worth something - but looked too neat to leave behind regardless.

A 1993 Donruss Dominator Greg Maddux - I guess it's not a pack pulled insert set, more like a 'box topper' bonus, but still a cool card.

Though it's a piece of plastic that I would have tossed a long time ago, I really like the branded top loader - which I assume was how the cards were originally shipped in. 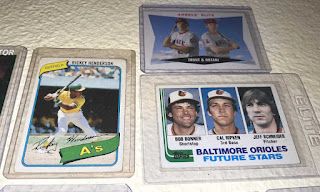 Maybe the highlights were the 1980 Topps Rickey Henderson #482 rookie card and the 1982 Topps Cal Ripken Jr. #21 rookie card - on first glance, I had second thoughts about picking the cards up [maybe the sticker price $15 each] because they were more 'well loved' and 'off-condition,' rather than cleaner copies with better eye appeal.

On the other hand, I've never really had these cards in my collection and at the very least, end up as binder material centerpieces to the collection of cards I have for each player - with these rookies in my possession, I'd have some bragging rights if I took a time machine to the junk wax era of the early 1990s.

I'm sure a lot of other bloggers would've paid the same price for your Henderson and Ripken rookies.