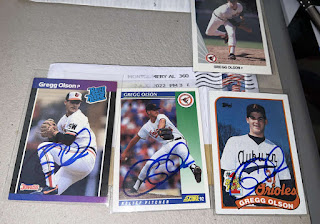 The former big league reliever signed my cards in about three weeks back in August c/o Auburn University where he is a coach - I may have wrote on my request to Olson that he could keep the other cards if he wanted, but to at least sign the 1990 Leaf if he could.

However in my return, the only card he didn't end up signing was the one I wanted signed the most - I just had to chuckle at this apparent mishap [at least for me] and ended up grabbing a signed copy of the 1990 Leaf on eBay.