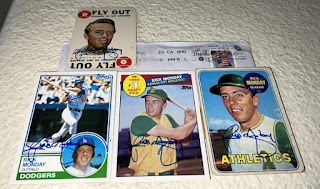 The former big league outfielder and longtime broadcaster signed my cards in about a couple of months c/o Los Angeles Dodgers - he is known for saving the American flag from being burned by a couple of protesters when he was at Dodger Stadium as a member of the Chicago Cubs back in 1976.

Besides his flag saving heroics, Monday was also the first ever MLB draft pick in 1965 and had a 19-year big league career - hitting 241 home runs with a .361 on-base / .443 slugging and an OPS+ of 125, which meant he was about 25 percent better than the average MLB player.